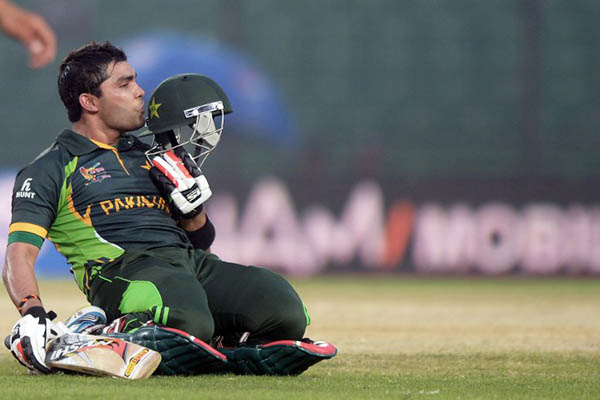 A century by Umar Akmal helped Pakistan overcome Afghanistan in the latter’s inaugural match of the five-nation tournament.

Defending champions Pakistan beat Afghanistan by 72 runs in the Asia Cup match in Dhaka on Thursday.

Afghanistan, playing their inaugural match in the five-nation tournament, impressed despite the defeat—but their lack of experience stopped them from causing an upset. Chasing a daunting target, the Afghans were 139-2 in the 36th over before losing their last eight wickets for 37 runs as Mohammad Hafeez (3-29) and Saeed Ajmal (2-25) gave Pakistan a win with a bonus point.

Asghar Stanikzai (40) and Nawroz Mangal (35) shared a 74-run partnership for the third wicket but they failed to match the required net run-rate, which climbed on them, undoing their run-chase.

Shahid Afridi dismissed Stanikzai to break the partnership before Mangal ran himself out to spark a collapse. Noor Ali Zadran had given Afghanistan a solid start with a 63-ball 44 with seven fours, before he fell victim to Ajmal’s dot balls.

Hafeez had Najibullah Zadran (one) and Samiullah Shinwari (14) to complete the win.

Pakistan captain Misbah-ul-Haq praised his rivals. “Afghanistan stuck to the basics and hit the lengths and lines that they planned. They really made it hard to score runs and they’re a really good side and their fielding effort was impressive too,” he said. “The match was almost out of our hands but it was one of the best innings from Akmal that led a very good fight-back.”

Afghanistan captain Mohammad Nabi said Akmal’s innings made the difference. “Akmal played very well in the end to put a big total on the board. Dropping him was the turning point.”

India, who beat Bangladesh by six wickets, will face Sri Lanka on Friday. Sri Lanka won the tournament’s opener by 12 runs against Pakistan on Tuesday.