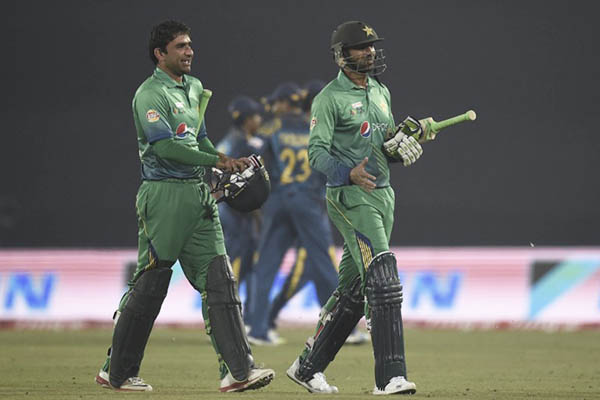 Pakistan put their disappointment at not making the Asia Cup final behind them in Dhaka on Friday, with a consolation six-wicket win against Sri Lanka in their final match.

Pakistan’s top-order batsmen finally hit some form to help the side reach 151-4 in 19.2 overs, after their bowlers restricted Sri Lanka to 150-4 at the Sher-e-Bangla National Stadium. Umar Akmal made the top 48 off 37 balls after Sharjeel Khan (31) and Sarfraz Ahmed (38) laid the foundation of their innings, overshadowing an unbeaten 75 by Sri Lanka’s Tillakaratne Dilshan.

The match, also the last for Sri Lanka, turned out to be a routine contest after Bangladesh eliminated both teams from the final with a five-wicket win over Pakistan on Wednesday. Bangladesh will face India in the final on Sunday.

“We’re good cricketers, just that we need to have more self-belief,” said Pakistan captain Shahid Afridi. “That’s what helped us in the chase today. We wanted to keep wickets intact in the first six overs and it worked.”

With nothing but pride at stake, both teams looked less tense—and Sri Lankan opening duo Dilshan and Dinesh Chandimal took full advantage to put on 110 runs, the best start in the tournament.

Wahab Riaz broke their stand when he forced Chandimal to give a catch to Sharjeel Khan at midwicket. Shoaib Malik struck in the next over to remove Shehan Jayasuriya for four, before Mohammad Irfan bowled Chamara Kapugedera and Dasun Shanaka in the space of three balls to halt Sri Lanka’s progress.

Chandimal, who led Sri Lanka in the absence of injured Lasith Malinga and Angelo Mathews, made 58 off 49 balls, his second half-century in the tournament, which included seven fours and a six. “Overall we played some good cricket,” said Chandimal. “We were 10-15 short with the bat and that was the turning point in this game.”

Dilshan ensured Sri Lanka still got a decent total with his 11th Twenty20 half-century, with 10 fours and a six. Irfan finished with 2-18 for Pakistan. The two teams will now head for the ICC World Twenty20, which starts in India next week.