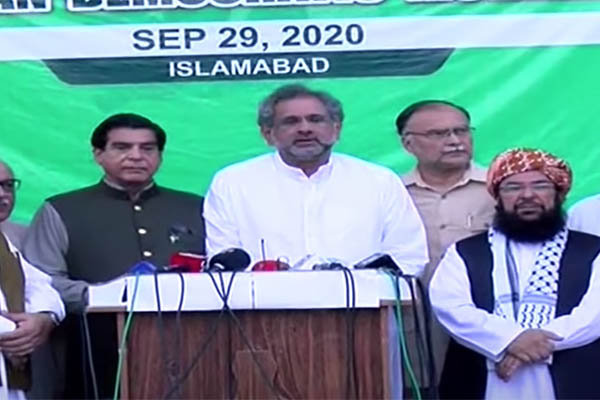 The united opposition’s Pakistan Democratic Movement (PDM) has delayed its inaugural rally from Oct. 11 to Oct. 18, with the venue to remain Balochistan capital Quetta.

Jamiat Ulema-e-Islam (Fazl) leader Abdul Ghafoor Haideri announced the new date, adding that a rally that the party had planned to stage in Quetta on Oct. 25 was also being delayed. He did not provide any new date for this rally.

Comprising 11 opposition parties, the PDM’s primary goal is to oust the incumbent Pakistan Tehreek-e-Insaf-led government overs its governance failures and rampant inflation in various sectors of the economy.

The alliance, over the weekend, appointed JUIF chief Maulana Fazlur Rehman as the leader of the anti-government movement. According to Pakistan Muslim League (Nawaz) Secretary General Ahsan Iqbal, the alliance’s leadership would be held on rotational basis, with the duration of each party’s appointee to be determined at a later date.

The government has repeatedly claimed that it does not “fear” the PDM’s announced protest—claims that ring hollow in light of members of the federal cabinet staging multiple press conferences daily to slam the opposition’s allegations and respond to any points raised by its leaders in their press interactions.

On Sunday, Science and Technology Minister Fawad Chaudhry reiterated his belief that the opposition’s movement would fizzle out before it formally begins. “Their narrative is so flawed it’s full of holes. No one believes in it,” he claimed, without offering any counter on what the government is doing to remove the opposition’s objections to its governance failures.