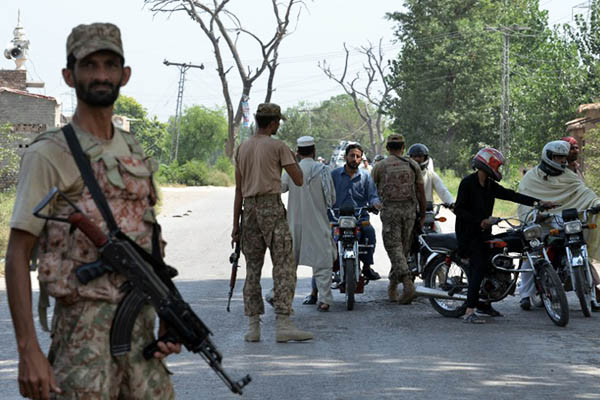 Military spokesman claims attackers came from Afghanistan and belong to a group based in the neighboring country.

Twenty-two suspects have been detained in connection with a deadly attack on the Badaber Air Base claimed by the Taliban, officials said Saturday.

Pakistani Taliban dressed in paramilitary uniforms attacked the Air Force base near Peshawar on Friday, killing at least 29 people, most of them soldiers, the group’s deadliest assault in months following a major military offensive against them. All 14 attackers were also killed, the military said.

“At least 22 suspects including eight Afghan nationals have been detained from different parts of the city since Friday after the attack, and are being thoroughly interrogated,” said senior local police official Shakir Bangash. He said some of the suspects were set free after an initial interrogation while others, including the eight Afghans, are still in custody.

A senior security official told AFP evidence was still being collected from the site of the attack to find more clues about how the incident happened and how the attackers entered the camp.

The TTP claimed responsibility for Friday’s attack in an e-mail sent to journalists, saying their “suicide unit” carried out the attack.

“The attackers came from Afghanistan, the attack was planned and controlled from there,” Bajwa said.

Islamabad and Kabul regularly accuse each other of supporting militants who cross the porous border to carry out attacks and of giving sanctuary to them. Afghanistan in particular accuses Pakistan of supporting Afghan Taliban insurgents, while Pakistan has been demanding Afghanistan hand over hardline cleric Fazlullah, head of the TTP who is believed to be hiding in eastern Afghanistan.

The Air Force has played a key role in the operation against militant hideouts in the tribal areas on the Afghan borders, pounding targets in countless sorties since the onslaught began in June last year. The Army launched the Zarb-e-Azb operation in June 2014 in a bid to wipe out militant bases in North Waziristan, and so bring an end to the bloody decade-long Islamist insurgency that has cost Pakistan thousands of lives.