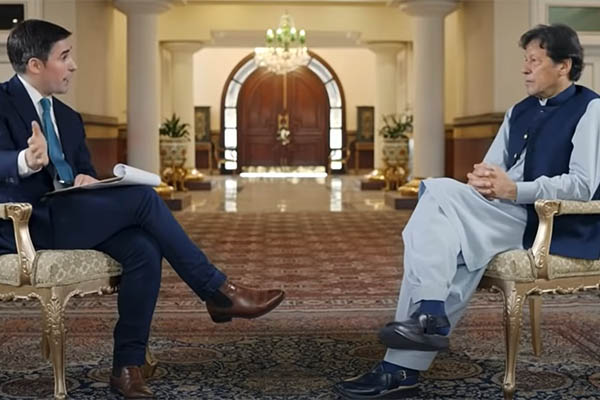 In interview, prime minister reiterates views on links between ‘temptation’ and sexual assault, as well as desire for a peaceful and stable Afghanistan

Prime Minister Imran Khan, in an interview broadcast on American broadcaster HBO on Sunday, defended his silence on the ongoing genocide of Uighur Muslims in China by claiming Islamabad discussed such matters with Beijing “behind closed doors.”

In a wide-ranging interview, journalist Jonathan Swan of Axios specifically questioned why Khan was so vocal about Islamophobia in the West while remaining mum on the status of Muslims living on the border of Pakistan. “China has been one of the greatest friends to us in our most difficult times. When we were really struggling, China came to our rescue. We respect the way they are and whatever issues we have, we speak behind closed doors,” he said, adding that there were flashpoints in areas covering Palestine, Libya, Somalia, Syria, Afghanistan. “Am I going to start talking about everything? I concentrate on what is happening on my border, in my country,” he said.

When Swan pointed out that the Uighurs were located in China, on the border with Pakistan, Khan deflected to the issue of residents of India-held Jammu and Kashmir, questioning why the Western world ignored their plight. “It is much more relevant. Compared to what may be going on with the Uighurs, 100,000 Kashmiris have been killed,” he claimed, reiterating his view of the disputed region being turned into an “open prison.”

Branding the West’s dismissal of Kashmiris, and taking up of the cause of Uighurs, “hypocrisy,” he said half of Kashmir was in Pakistan and that concerned him more, adding that China had informed Pakistan that the abuse of Uighurs being reported by media was “exaggerated.”

To a question on an open letter he had written to heads of Muslims states last year, urging them to unite against Islamphobia, the prime minister said he felt there was a communication gap between the Islamic world and Western societies that needed to be addressed. “It happened after 9/11 when the world ‘Islamic’ terrorism came into currency,” he said, stressing that this had led to the common man in the West believing Islam advocated terrorism. Then, he claimed, any time a Muslim was involved in a terrorist act, the entire Muslim community became targets.

Swan reminded Khan of a statement from earlier this year in which he had suggested a link between rape and obscenity. “It is such nonsense. I never said that about the veil … I said the concept of purdah, which is to avoid temptation in society,” the prime minister said. He said Pakistani society was very different from that of the West. “If you raise temptation within society and all these young guys have nowhere to go, it has consequences,” he said, echoing his words from April. “Do you think that what women wear has any effect, that it is part of this temptation?” Swan asked.

“If a woman is wearing very few clothes, it will have an impact on men unless they are robots. I mean its common sense,” Khan responded, adding that expecting all cultures to hold the same views was akin to “cultural imperialism.” He also referred to a lack of “nightclubs and discos” in Pakistan as reducing the “exposure” Pakistani men got to women, which prompted them to “act out” once they faced women in skimpy clothing. The interviewer pointed out that Khan’s statement appeared hypocritical, as he had spent decades as a “playboy” and was often photographed with women in skimpy garments. “This is not about me,” responded Khan. “It’s about my society. My priority is how my society behaves … so when I see sex crimes going through the roof we sit down and discuss how to tackle it. It is having an impact in my society,” he claimed.

To a question on the ongoing Afghanistan peace process, and the impending U.S. withdrawal from the war-torn state, Khan said he was “happy” that the world had accepted a negotiated settlement, as he had always advocated against a military solution. However, he warned, there was great risk of a civil war if a political settlement was not achieved between Kabul and the Taliban. This, he claimed, was only achievable through a coalition government between the Taliban and the Afghan leadership.

Questioned on where the U.S. had erred in announcing a final date for its withdrawal, the prime minister branded it a “mess” because issuing a timeframe shifted the narrative. “The moment they gave a timeframe the Taliban would have considered that a victory,” he said and stressed that Islamabad would deal with whatever government was placed into power by the people of Afghanistan.

“Does it not concern you that this group of people [Taliban] is accumulating power right next to you?” questioned Swan. “I’m not a spokesman for the Taliban. For me to say what they [should] be doing, shouldn’t be doing is pointless. In case Taliban go for an all out victory, there is going to be an incredible amount of bloodshed and the country that will suffer the most after Afghanistan, is going to be Pakistan,” he said, reminding Swan that Pakistan already housed three million Afghan refugees and such a situation could increase that number.

Ties with the U.S.

Swan referred to a recent visit of CIA Director William Burns to Pakistan during which he met the Army chief. When questioned on whether he had met Burns as well, Khan said he had not and claimed the intelligence agencies of both countries have been in “constant touch” since 9/11.

“Would you allow the American government to have CIA here in Pakistan to conduct cross-border counterterrorism missions against Al Qaeda, ISIS or the Taliban?” asked Swan. “Absolutely not. There is no way we are going to allow any bases, any sort of action from Pakistani territory into Afghanistan. Absolutely not,” he replied, noting that Pakistan had suffered over 70,000 casualties due to the war on terror. “We cannot afford anymore military actions from our territory. We will be partners in peace, not in conflict,” he added.

To Swan asking if such refusals also applied to U.S. Air Force being allowed to use Pakistani airspace for airstrikes against the Taliban, the prime minister reiterated that Pakistan “would not be a part of any conflict” and pointed out that bombings hadn’t worked for 20 years and wouldn’t work in future.

Asked if he had spoken to U.S. President Joe Biden since his election to the presidency, Khan said: “No, I haven’t.” When pressed on why, he added: “Whenever he has time he can speak to me. At the moment, clearly, he has other priorities.” To Swan asking what he would discuss with Biden if given the chance, the prime minister said the U.S. could play an important role in achieving peace in Kashmir.

“If the Americans have the resolve and the will, [Kashmir] can be sorted out,” he said, adding that if the Kashmir issue were resolved, there would no longer be any need for nuclear deterrents.

To the interviewer questioning why Pakistan reportedly had the fastest growing nuclear arsenal in the world, the prime minister said he disagreed with this view. “Pakistan’s nuclear arsenal is simply a deterrent, to protect ourselves,” he said, adding that he was “not sure” whether it was growing. “As far as I know, it’s not an offensive thing. Any country which has a neighbor seven times its size would be worried,” he said and stressed that he personally was and always had been “completely against nuclear arms.”

Claiming that there had been no outright conflict between Pakistan and India—just border skirmishes—since both countries had achieved nuclear deterrence, Khan said this was necessary. “The moment there is a settlement on Kashmir, the two neighbors would live as civilized people. We will not need to have nuclear deterrents,” he added.

In a portion of the interview posted on Axios’ YouTube page, but not broadcast, Khan shared how targeted, “smart” lockdowns had helped Pakistan keep its coronavirus pandemic under control. Noting that over 70 percent of Pakistan’s labor class was linked to the informal economy, and were daily wagers, he said the government had decided against imposing complete lockdowns to prevent economic hardship.