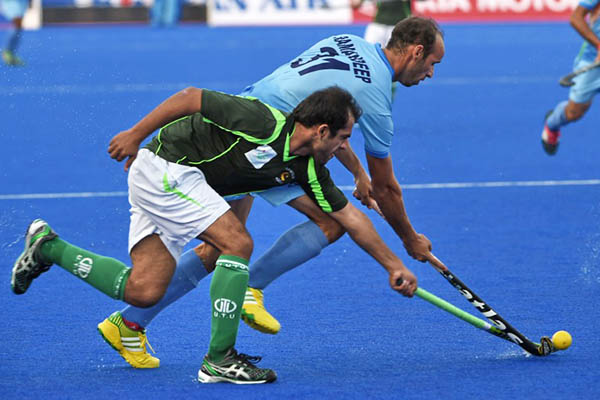 Defending champions will now proceed to semi-finals regardless of results of their last league match.

In a keenly contested ‘pool B’ encounter, Muhammad Bhutta put Pakistan ahead in the third quarter before Nikkin Thimmaiah drew level at the start of the fourth. Waqas took advantage of a defensive lapse to hit the winning goal that gave unbeaten Pakistan a place in the semi-finals even before their last league match against Oman on Saturday.

The winner between India and China on Saturday will determine the other semi-finalist from the pool. Both teams are level on six points from three matches.

Pakistan’s coach Shahnaz Sheikh played down the rivalry against India, saying it was more important to gain full points from the match. “I think we played our best game in the tournament,” Sheikh, a former international player said. “Every match counts in an event like this and we are capable of doing well against any team. In Pakistan, hockey is a national sport and people celebrate when we win. It is not only about India. They want us to do well against every team.”

With the winner gaining a direct entry into the 2016 Olympics in Rio de Janeiro, Sheikh is anxious to get the gold medal again. “We did not qualify for the World Cup and that was a huge blow,” he said. “We need to win this one because the qualifiers are tough.”

India’s Australian coach Terry Walsh was livid at the defeat, but said his team’s campaign was not over yet. “It was frustrating to watch the game from outside,” said Walsh. “But the good thing is that it was just a three-point match, not a semi-final or a final. Pakistan had more desire to win than we did. Now we have to concentrate on the match against China. I will make sure our guys get more competitive.”