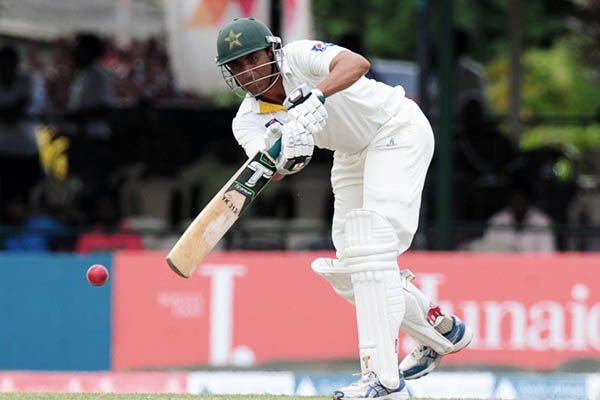 Pakistan are eager to celebrate senior batsman Younis Khan’s 100th Test appearance with a series-clinching victory against Sri Lanka in the match starting Thursday in Colombo.

Misbah-ul Haq’s tourists are riding high after a 10-wicket triumph in the opening Test in Galle even though the first four sessions of the match were washed out. Haq wants his team to perform equally well in the 37-year-old Khan’s landmark Test at the P. Sara Oval and take an unbeatable lead in the three-match series—a feat that has eluded them on Sri Lankan soil since 2006.

“Younis is the backbone and a very special member of the Pakistan team,” Haq told reporters on Wednesday. “Playing 100 Tests is a huge achievement for any cricketer. He brings a lot of value to the team and brings a lot of good, positive energy. We all wish he can make his 100th Test memorable with a lot of runs. And we want to honor him by winning the match.”

Khan’s 29 Test centuries, the same as Australian legend Donald Bradman, are the most by any Pakistan batsman. Inzamam is in second place with 25.

Khan said it was a “dream come true” to be playing his 100th Test, but he still has goals to fulfill before hanging up his boots.

“It’s like a dream come true because I wished for it,” he told the Cricinfo website. “When I played my first Test, I got a taste of this format and started developing a desire to play 100-plus Test matches. I will call off my career with grace, but I still have some goals in my mind and I am close to achieving those goals as well. I can’t share that goal at this point, but you will know very soon.”

Haq said the tourists were hungry for further success after they fought back from 96-5 in their first innings to record an emphatic win in Galle. Leg-spinner Yasir Shah ripped through Sri Lanka’s second innings with figures of seven for 76, leaving Pakistan a modest victory target of 90 runs.

“We gained a lot of confidence from the first Test and just want to carry that momentum in the remaining games,” the 41-year-old Haq said. “Everyone is focused on tomorrow’s Test. We can’t afford to live in the past. Every new match is a fresh start.”

Haq hinted that all-rounder Mohammad Hafeez was likely to bowl in the match even though umpires reported his action after the Galle Test for a second time in seven months. Hafeez, who was cleared to bowl in April after being reported for the first time last November, is expected to undergo mandatory testing next week. But regulations allow him to bowl till the test results are declared. If his action is found to be illegal after testing, Hafeez will not be allowed to bowl for a year.

“It’s very disappointing that he is under the radar again,” said Misbah. “It can be so frustrating for the bowler to be reported a second time. But the good thing is that he can still bowl in this match and that’s a plus point for us. He has an important role to play.”

Islam Does Not Permit Incidents Such as Sialkot...