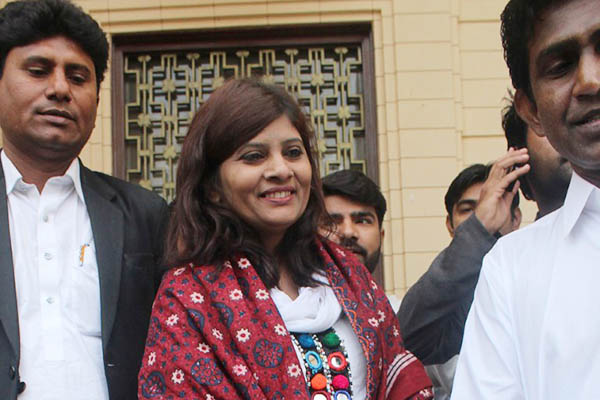 Ruling PMLN wins 15 of 52 seats in Upper House, with PPP trailing with 12 and the PTI with six

Pakistan elected its first female senator from the lowest Dalit caste in weekend polls, which also saw the ruling party strengthen its hand ahead of general elections due later this year.

The surprise victory of opposition candidate Krishna Kumari Kohli in the Senate election stirred a wave of optimism on social media, as Pakistanis celebrated the rare success for a woman from a marginalized community at the bottom of the Hindu caste hierarchy.

“I feel proud, I am thankful to Pakistan Peoples Party that they nominated me,” Kohli told AFP on Sunday.

“Kudos to PPP for electing #KrishnaKohli…. Our parliament should have representatives of all religions, classes & genders in pursuit of true democracy,” tweeted rights activist Jibran Nasir.

Pakistan’s Hindus, who make up around two percent of the country’s 200 million people, have long faced economic and social discrimination. Members of Parliament and of provincial assemblies voted Saturday to fill half the seats in the Senate, or Upper House, before elections due this summer for the Lower House of Parliament.

The ruling Pakistan Muslim League (Nawaz) won 15 of the 52 seats up for election to secure a total of 33 spots in the 104-seat Upper House. Support from allies is likely to give it a dominating majority. The Pakistan Peoples Party (PPP) won 12 and the Pakistan Tehreek-e-Insaf party of former cricket star Imran Khan came third with six.

“Pakistan Muslim League (Nawaz) has secured a clear majority in the Senate polls,” the party announced late Saturday on its official Twitter account.

The victory came despite legal setbacks.

Last July the Supreme Court toppled PMLN supremo Nawaz Sharif from the premiership over corruption allegations. Ahead of the Senate vote, the court also barred Sharif from leading his party, forcing all PMLN candidates officially to stand as independents because they had been selected by the axed chief.

Following the win, Sharif called on his supporters to keep fighting at the ballot box in the face of pressure from the courts. “First they removed my name and then they removed the Muslim League’s name but members of parliament and provincial assemblies rejected that decision,” he told thousands of supporters at a rally in Gujrat on Sunday.

Despite the court rulings, the PMLN has won a string of by-elections following the ousting of Sharif. The Sharif clan and their supporters have repeatedly denied corruption, suggesting Nawaz is the victim of a conspiracy driven by Pakistan’s military establishment.

Stormy for US president, this stunning lady for president of Pakistan.

Tell all Dalit friends to stay peaceful, and not lose the moral edge. The world is on your side.

All the best, PSR, Oz

The article provided a huge breakthrough for me and perhaps for the history of South Asia and the Americas. Dalit folk, ex- the Indus civilisation breakup, being in Nepal, bridges the gap between that and the first dated step pyramids in Middle America. Photos of the dress at religious us festivals in the Andes are at times so close they can be mis-identified. A residence in the Himalayas, perhaps with later time in Indonesia, neatly bridges the thousand-year between these bronze age cultures. We have the ships, now need the DNA research.

Below is a comment posted this morning, on a couple of Indian newspapers, to Dalit friends, before I saw this article from Kathmandu. Thanks, Raj Pariya and all at Ekantipur, you just changed world h

To all Dalit folk and other Indian friends,

There is growing archaeological and legendary evidence that this nonsense dates back to when one mob of Aryan barbarians (my lot) invaded India and trashed the world’s most civilized culture, that of the Indus River Valley. That is what all barbarians overrunning more civilised people do. See aparthate (not a typo, it is correctly pronounced that way) South Africa did. It helps no-one. Grow up, India, 3,500 years would try anyone’s patience.

There is considerable archaeological and cultural evidence that the Bronze-age and step-pyramid culture of the Indus, via an intermediary, perhaps in Indonesia, is what started the advanced civilisations of the Americas.

Stay peaceful, Dalit friends. It gives you a huge ethical edge, don’t lose it. The world is on your side and watching.