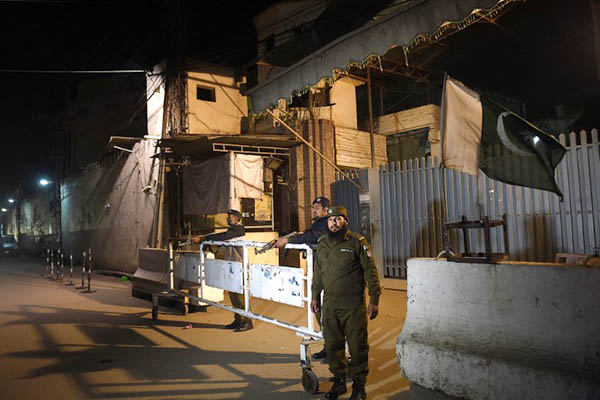 Policemen guard the headquarters of Jamaat-ud-Dawa following its seizure by authorities in Lahore. Arif Ali—AFP

Pakistan has detained more than 100 suspected militants, the country’s interior ministry said on Thursday, amid an ongoing crackdown on extremist groups prompted by weeks of high tension with neighboring India.

Members of two Pakistani militant groups accused of attacks on Indian soil were targeted in the operation, which was announced on Monday following an insurgent attack in the disputed Himalayan region of Kashmir that killed 40 Indian paramilitaries last month.

“Law enforcement agencies have taken 121 people under preventive detention as of today,” the interior ministry said in a statement.

India says JuD is a front for the militant Lashkar-e-Taiba (LeT) group, which it accuses of carrying out the 2008 Mumbai terror attacks, which killed more than 160 people. JuD leader Hafiz Saeed is wanted by the U.S. but has largely operated freely in Pakistan in the past, despite a $10 million U.S. bounty on his head.

A source close to the groups confirmed that authorities were detaining suspected militants on a daily basis.

Nearly 200 religious schools, along with several hospitals and other charitable organizations run by the militant groups, have been seized and their operations turned over to provincial governments, the interior ministry said.

The crackdown was part of an ongoing drive against proscribed organizations and not conducted under pressure from India, interior minister Shehryar Afridi claimed on Tuesday.

Last month’s suicide bomb attack in India-Occupied Kashmir spurred tit-for-tat air raids between India and Pakistan, igniting fears of an all-out conflict as world powers pleaded for restraint. Pakistan captured one Indian pilot, releasing him on Friday in a bid to pull both countries back from the brink, though tensions remain high.