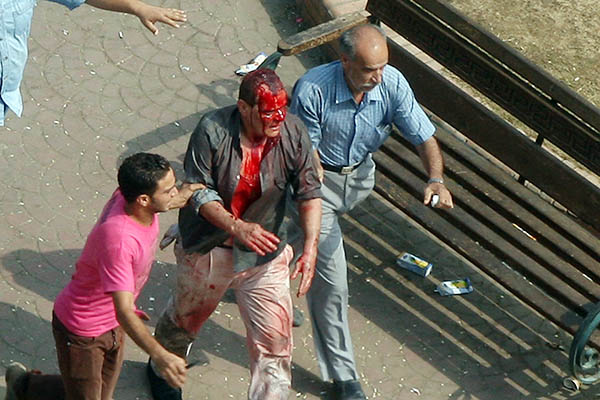 The government of Pakistan on Thursday expressed its “dismay and deep concern” over a crackdown on Egyptian protesters, terming it a “major setback” for a democratic government in Egypt.

In a statement, Islamabad urged the military-led government of Cairo to free political prisoners and restore democratic institutions as soon as possible. “As a friend and well-wisher of the people of Egypt, Pakistan … urges all parties to exercise restraine and to respect the fundamental rights of the fraternal people of that great country,” it said. “It is the earnest hope of the Government and people of Pakistan that the brotherly people of Egypt … would be able to overcome their current challenges.”

At least 464 Egyptians were killed in violence sparked by a crackdown on the protest camps of supporters of ousted Islamist president Mohamed Morsi, government officials said Thursday. At least 421 civilians died in Wednesday’s violence, ministry spokesman Mohammed Fathallah said, adding that 137 people had been killed in the main Rabaa al-Adawiya camp, which pro-Morsi protesters had occupied for weeks. At the smaller of the two encampments in Nahda Square, 57 people were killed and 227 died in the rest of the country, he added.

The interior ministry said 43 policemen had also been killed.

Despite the violence, Egypt’s press trumpeted the end of the pro-Morsi demonstrations, which had occupied two Cairo squares since the Islamist president’s July 3 ouster by the military. “The nightmare of the Brotherhood is gone,” the daily Al-Akhbar’s frontpage headline read. “The Brotherhood’s last battle,” added Al-Shorouk.

The newspapers carried photos of protesters brandishing weapons and throwing stones, but none from makeshift morgues where dead protesters were lined up in rooms slick with blood. At least four churches were attacked as police broke up the protests, with Christian activists accusing Morsi loyalists of waging “a war of retaliation against Copts in Egypt.”

The day’s violence was Egypt’s worst in decades, exceeding even that seen during the 18-day uprising that ousted president Hosni Mubarak.

An AFP correspondent counted at least 124 bodies in makeshift morgues in the Rabaa al-Adawiya protest site and Morsi’s Muslim Brotherhood spoke of 2,200 dead overall and more than 10,000 wounded.

The Brotherhood remained defiant on Thursday, with spokesman Gehad al-Haddad saying demonstrations would continue. “We will always be non-violent and peaceful. We remain strong, defiant and resolved,” he tweeted. “We will push forward until we bring down this military coup.”

Morsi loyalists have insisted that their demonstrations are exclusively peaceful, but an AFP reporter saw several protesters carrying weapons at Rabaa on Wednesday.

The violence prompted vice president and Nobel laureate Mohamed ElBaradei to resign, saying he was troubled over the loss of life, “particularly as I believe it could have been avoided.”

“It has become too difficult to continue bearing responsibility for decisions I do not agree with and whose consequences I fear,” he said.

The dramatic assault on the sit-ins began shortly after dawn on Wednesday, with security forces firing tear gas before storming the sites. The operation surprised many, coming after officials described plans to gradually disperse the protests over several days in a bid to avoid violence.

Some Morsi supporters were eventually able to leave the Rabaa site through a safe passage, flashing victory signs as they left.

By Wednesday evening, a security official said Rabaa al-Adawiya was “totally under control,” adding: “There are no more clashes.”

In the smaller of the protest camps, at Al-Nahda Square in central Cairo, police said they had control of the area after just two hours.

Dozens rounded up in the dispersal were shown sitting on the ground, handcuffed and surrounded by security forces.

Europe’s leading powers, along with Iran, Qatar and Turkey, strongly denounced the use of force by the interim government.

The White House said Washington, which provides Egypt with $1.3 billion in annual military aid, “strongly condemns” the violence against the protesters and opposed the imposition of a state of emergency for a month and the imposition of curfew in 14 provinces.

But Egypt’s interim prime minister Hazem al-Beblawi praised the police for their “self-restraint” and said the government remained committed to an army-drafted roadmap calling for elections in 2014.

The violence was not confined to Cairo, with clashes between security forces and Morsi loyalists breaking out in the northern provinces of Alexandria and Beheira, the canal provinces of Suez and Ismailiya, and the central provinces of Assiut and Menya.

In Alexandria, hundreds of angry Morsi supporters marched Wednesday through the streets armed with wooden clubs chanting: “Morsi is my president.”

The violence was a dramatic turn of events for the Muslim Brotherhood, who just over a year ago celebrated Morsi’s victory as Egypt’s first elected president.

His turbulent year in power, marred by political turmoil, deadly clashes and a crippling economic crisis, turned many against the Islamist movement, with millions taking to the streets on June 30 to call for his removal.

An elected government of President Muhammad Morsi was overthrown by the army on the behest of US and on the pretext that there were ‘millions’ of protesters who wanted an end to the elected govt. Calling this overthrow of the elected govt. ‘ouster’ tells the whole story of ‘prejudiced’ opinion and reporting. A more objective view would be much desirable in making the world a better place to live in. So many killings by army and AFP sees ‘armed protesters’.

The seeds of conflict, envy and rivalry were sowed before Islam, between the two clans of Quresh, Banu Hashim and Banu Ummaya. The Conflict remains even after Islam to the present day. The envy leads to create, two biggest sects of Islam, Shia and Sunni and now the dysfunctional states and societies in Middle East and some parts of South Asia.
http://en.wikipedia.org/wiki/Hashemite
http://en.wikipedia.org/wiki/Umayyads
http://www.maaref-foundation.com/english/library/pro_ahl/imam02_hasan/the_life_of_imam_hasan/03.htm