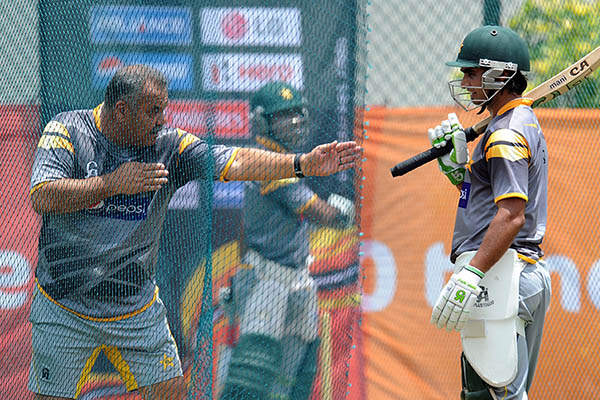 National cricket team coach Dav Whatmore says his tenure has had both good and bad times.

Pakistan cricket coach Dav Whatmore on Friday assured fans his team will put the woeful performance in the Champions Trophy behind them and will look for better results on their tour of the Caribbean.

Pakistan crashed out of the Champions Trophy in England last month after losing all three matches due to sloppy batting.

“Obviously we need to do better, the results in England were very painful for everyone and that episode is done to death. We now look forward for a better job in the West Indies,” Whatmore told reporters. “We can never guarantee to win 5-0 but we will fight very hard for a win,” said Whatmore, whose team will play five one-day and two Twenty20 matches in the Caribbean.

The first one-day will be played in Guyana on July 14.

The 59-year-old former Australian batsman, who took over as Pakistan coach in March last year, said his tenure had both good and bad times. “I rate my performance as one that is very difficult to judge in win-loss ratio,” said Whatmore, under whose coaching Pakistan have won 12 one-day matches but lost 13. Pakistan have also lost four of the six Tests under his guidance, with two draws.

“I think that sometimes it is very easy to just look at win-loss ratio,” he said. Recalling the January-March tour of South Africa where Pakistan were routed 3-0 in Tests and 3-2 in one-days, he added: “I would be very surprised if you say that we would win in South Africa. They are ranked world No. 1 and had beaten Australia and England in away series, so I think it’s unfair to see at the win loss ratio.” He added: “I think you need to look at series in isolation, from time to time, and make an accurate and subjective opinion, so it’s been some good times and some not very good times.”

Whatmore denied he had differences with chief selector Iqbal Qasim, who stepped down from his post on Thursday. “I want to say thanks to Qasim for the services he has rendered. I appreciate that because of the difficulties that exists with the position and I had no problems with him.”

Whatmore said he was comfortable with his coaching tenure despite it ending a year before the 2015 World Cup. “Usually coaches go tour by tour. South Africa have a coach for two years until the World Cup but I am pretty okay with mine having worked for 16 months and there is more time to discuss for extension.”

He said he hoped all-rounder Shahid Afridi will raise his form after being recalled to the one-day team. “Afridi is a great servant for Pakistan cricket and if he raises his form like he did in Johannesburg then he will be useful with both bat and ball,” said Whatmore of Afridi’s 88 in South Africa in March this year.

Pakistan’s team will fly to the Caribbean on Saturday night.