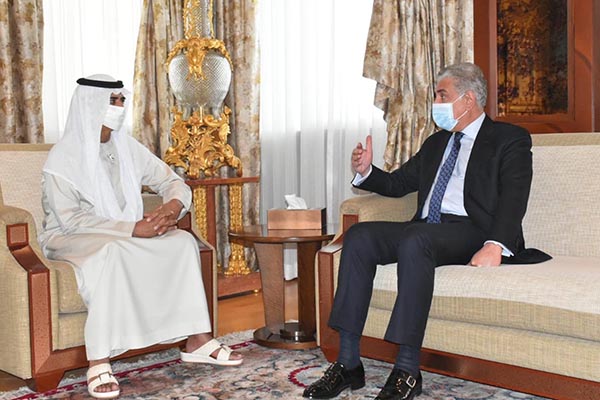 Foreign minister hopes his visit to the U.A.E. will enhance bilateral ties between Islamabad and Abu Dhabi

Claiming that Pakistan had helped the U.S. achieve a peace deal with the Taliban, as well as the subsequent intra-Afghan negotiations, Foreign Minister Shah Mahmood Qureshi on Sunday hoped the people of the war-torn state will avail this historic opportunity to achieve a peaceful, stable and prosperous Afghanistan.

Addressing media on the second day of a three-day official visit to the United Arab Emirates, he stressed that Pakistan had consistently facilitated the Afghan peace process, as a peaceful and prosperous Afghanistan was in its best interest. “We support reconciliation in Afghanistan and progress in peace process in Istanbul,” he wrote in a posting on Twitter. “I look forward to meeting Foreign Minister [Mohammad Hanif] Atmar at Istanbul Conference and to hosting him in Pakistan soon after to discuss a way forward post conference,” he said, referring to a phone conversation with Atmar during which he claimed bilateral relations and the evolving peace process were discussed.

Also on Sunday, Qureshi reiterated that he had no plans to meet his Indian counterpart, Subrahmanyam Jaishankar, during his visit to the U.A.E., adding that dialogue could only occur if Delhi reversed its decision to abrogate the special constitutional status of India-held Kashmir. Noting that both countries needed to examine their bilateral ties, the foreign minister claimed Pakistan wanted to “live in peace” with all its neighbors and had never refused any dialogue.

Addressing a press conference in Dubai after visiting the Pakistan pavilion at the World Expo-2020 scheduled for later this year, Qureshi said Islamabad was “delighted” to be a part of this landmark achievement of the U.A.E. Claiming that the Pakistan pavilion was a result of decades of ties between the two nations, he claimed this proved the enhancing economic ties and bilateral cooperation between them in various sectors.

Hoping this his visit to the U.A.E. would further strengthen bilateral ties, Qureshi said the World Expo would feature members of the expatriate Pakistani community who had played a role in the progress and prosperity of the Gulf nation. He said Prime Minister Imran Khan would be invited to the event as part of the countries celebrating 50 years of brotherly diplomatic relations.

Qureshi also reiterated his government’s claims of ensuring e-voting for overseas Pakistanis, claiming the PTI wanted them to play a role in politics and policymaking.