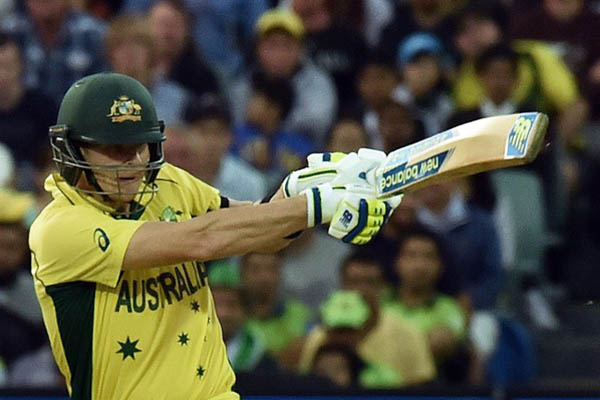 Australia will now take on India in a semi-final match next week.

Australia overcame a fiery spell from fast bowler Wahab Riaz to record an entertaining six-wicket win over Pakistan in the World Cup quarter-final at the Adelaide Oval on Friday.

The co-hosts, chasing Pakistan’s modest 213-all out, were reduced to 59 for three in the 11th over before Steve Smith (65) and Shane Watson (64-not out) swung the match around with a fourth-wicket stand of 89. Glenn Maxwell smashed an unbeaten 44 off 29 balls with five fours and two sixes as Australia recovered to coast home in the 34th over in front of a full house of nearly 47,000 spectators.

Australia’s eighth consecutive win over Pakistan on their own soil set up an enticing semi-final clash against defending champions India at the Sydney Cricket Ground on Thursday.

Pakistan, who won the toss and elected to bat, were shot out for 213, with one ball to spare, as fast bowler Josh Hazlewood grabbed four wickets and Mitchell Starc and Glenn Maxwell took two each. Haris Sohail’s 41 was the top score. Three other batsmen settled down to reach 20 but were unable to build on their starts.

If Australia expected an easy chase, Riaz provided a rude shock with a hostile opening spell of two for 24 in six overs. However, it was right-arm seamer Sohail Khan who gave Pakistan an opening by trapping Aaron Finch leg-before in the third over.

Finch, whose top score in the tournament after making 135 in the opening match against England is 24, asked for a television review, which proved umpire Kumar Dharmasena had made the correct decision.

Riaz, brought into the attack in the ninth over as the fourth bowler, struck with his third legal delivery by having the dangerous Warner caught at third man. Warner made 24 off 23 balls when he attempted to slash a short ball and Rahat Ali took a well-judged catch running in from the boundary.

Riaz removed Clarke in his next over as the Australian captain fended at a short ball and lobbed an easy catch to Sohaib Maqsood close to the wicket on the on-side. Watson was greeted to the wicket with a barrage of short-pitched deliveries from the fired-up Riaz, one of which nearly cost him his wicket when he was on four.

The all-rounder hooked a bouncer high to fine-leg where Rahat Ali got under the ball but dropped the catch to loud groans from the Pakistani fielders and supporters in the packed stands. The pressure eased as a tiring Riaz was taken off after his sixth over, allowing Smith and Watson to build a partnership.

The pair stayed together till the 27th over, taking the total to 148 for three, when seamer Ehsan Adil broke through by having Smith leg-before as the batsman missed an attempted flick.

Riaz, returning to the attack in the 29th over, almost claimed another wicket with his second delivery back as Maxwell top-edged a pull, but Sohail Khan failed to hold the ball at third man.

Maxwell sent Australia cruising to victory with a typically aggressive knock before Watson hit the clinching boundary, with Pakistan left ruing the lack of runs on the board by their batsmen.