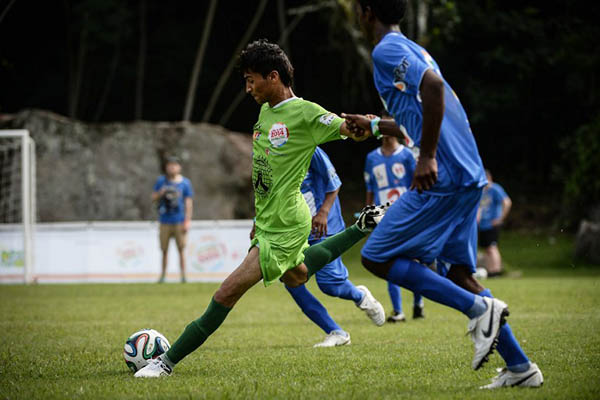 Pakistan and India got a taste of the “Maracana” atmosphere on Tuesday, as teams comprised of street children from the rival countries met at the Street Child World Cup in Rio. The result, a thumping 13-0 win for the Pakistanis, was immaterial, team delegations stressed, as they eschewed traditional rivalries.

Star of the show was 15-year-old Raziq Mushtaq, who bagged eight goals to leave the Indian defense in tatters. “I am very happy to score eight goals. I have always dreamed of being a footballer,” he beamed. “But I never dreamed of playing an event in Brazil, the land of football,” said the youngster, the pick of a selection spotted by non-profit charity Azad Foundation, which rehabilitates street children in Karachi.

India won the inaugural event in Durban four years ago, but were no match for a side which outmuscled them at the “Maracana,” one of the pitches at the Vargen Pequena complex in Rio’s western suburbs. Robbed of a triple hat-trick only by the crossbar, Mushtaq said the tournament was the opportunity of a lifetime for him and another 230 children, boys and girls, at an event which boasts former England skipper David Beckham as a patron.

“Football is more than just a game for us. At home, people will be proud—especially as it was India we beat,” said Mushtaq. “But this is a game, not a war. The teams have been billeted together and we are friends. I want to turn professional and support my family and then other children,” he added after a match preceded by the playing of both nations’ national anthems, during which players sang and placed right hands on hearts.

If the idea of entente cordiale can appear foreign to the neighbors’ politicians, the concept was neatly encapsulated by tournament volunteer Annika Katarin, a Londoner of Indian origin. “Sometimes there is friction, but times are changing. I genuinely support both teams,” said Katarin, who had painted the word “India” on one cheek and “Pakistan” on the other. “If we youngsters don’t change things now then when can we? I just feel upset it was such a thrashing for India,” she added.

After the heavy defeat, nonetheless, Singh and Indian officials suggested that the Pakistanis “looked like professionals. It was not equal. Maybe we would have given them more of a run for their money had it been cricket!”

Pakistani counterparts responded their team had spent several weeks preparing hard—but were the genuine street article. “This is about giving street children a future,” said Syed Iftan Maqbool of the Azad Foundation, whose slogan is “unity through competition.”

Maqbool put the team through their paces before—and after—the game, haranguing his charges for missing their “target” of 15 goals. “You have to set the bar high,” he said with a smile ahead of a 2-0 afternoon success over Kenya.

Syed Farrukh Bokhari, supporting the Pakistani charity in London, said street children suffered in that they often had no personal documentation from birth and were seen as non-persons. “In these cases, the government should become a guardian. They should facilitate that. A child should not need a piece of paper to say ‘I am someone.’ He is who he is. I am who I am.”

Are they really ‘children’? Who knows what their date of birth is? It is called ‘street-smarts’ if not ‘frauds’. Same trick is played in special Olympics to bag gold medals when ‘street-smarts’ play ‘mad-house’, and ‘It is Mad-Mad World’. Same thing happens in schools when a 17 years old on fake documents beats a 12 year old in O’Level.