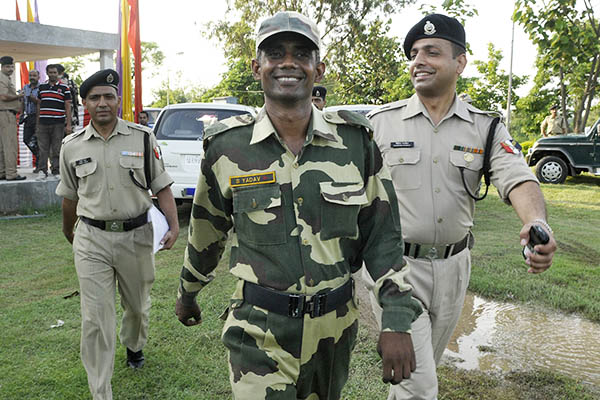 Satyasheel Yadav says he was treated well and is happy to be returning home.

Officials on Friday released an Indian border guard who was taken into custody for allegedly violating the de-facto border in the disputed Himalayan territory of Kashmir, officials said.

The guard, whom officials identified as Satyasheel Yadav, was swept into the Pakistani side of the Chenab River after a patrol boat he was in capsized on Wednesday, according to a senior official from the paramilitary Rangers. “He has been handed over to Indian authorities after routine interrogation,” the official added.

The handover took place at the border near Sialkot city and came a day after Indian foreign ministry officials met Pakistan’s Deputy High Commissioner in New Delhi to discuss the issue.

Yadav was patrolling in a boat with another border official, which later capsized. He told Pakistani authorities that while the other official swam back, he could not make it because he did not know how to swim. “They made me comfortable. I was given food. I have no complaints. I am very happy I am going home,” the guard told the press before his release, according to India’s NDTV.

In a separate incident, Indian troops arrested a Pakistani villager who was cutting fodder for his animals in a forest near the Line of Control, officials said Friday.

Sub-inspector Malik Rashid, head of a local police station, said the incident occurred Wednesday in the village of Darra Sher Khan in Poonch.