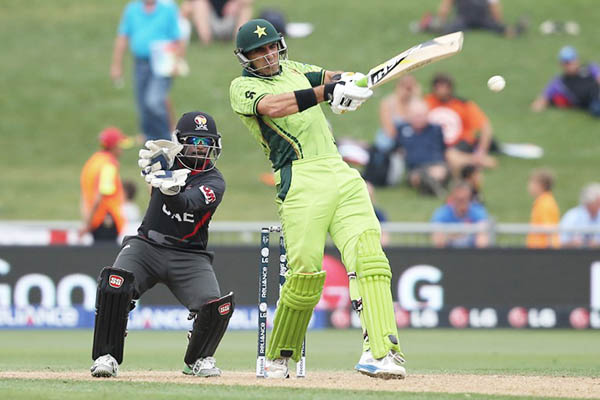 Pakistan continued their revival in the World Cup with a professional batting and bowling performance in a 129-run win against United Arab Emirates in Napier on Wednesday.

Opener Ahmed Shehzad fell seven short of his maiden World Cup century while Haris Sohail (70) and skipper Misbah-ul-Haq chipped in with 65 which helped Pakistan to post a big 339-6 on a flat McLean Park pitch. They then restricted the U.A.E. to 210-8 in their 50 overs with Shaiman Anwar continuing his brilliant form with the bat by scoring 62.

“That was a much needed win for us. We won by a margin so we can relax now. We have a good net run rate now also,” said Haq.

U.A.E. captain Mohammad Tauqir admitted chasing such a huge score was always going to be beyond them. “340 was a big total for us, but we batted 50 overs and we are happy with this effort. Anwar is very confident and in great form,” said Tauqir.

A required rate of six-plus an over was always beyond U.A.E.’s reach but after losing their first three wickets with just 25 on the board—two to paceman Sohail Khan—Anwar and Khurram Khan took the fight to the Pakistan bowlers adding 83 for the fourth wicket. Anwar hit four boundaries and two sixes during his 88-ball knock and with 270 runs in four matches became the top run-getter in the tournament. Khan hit three fours and a six off 54 deliveries.

Pakistan’s bowling was hampered by the absence of spearhead Mohammad Irfan who hurt his hip during a fall in the field and could bowl only three overs. The team said Irfan’s injury was not serious and he was held back as precaution.

Shehzad and Sohail restored Pakistan during their second wicket stand of 160 after they lost out of form Nasir Jamshed for four in the fourth over. Guruge could have had Shehzad in his fourth over but Khurram dropped a sharp chance when the batsman was on eight and three runs later Shehzad got another life off Mohammad Naveed.

Shahid Afridi hit two sixes and a four in his seven-ball 21 not out and when on two became the fourth Pakistani, and 27th batsman, in the world to cross 8,000 runs. This was Afridi’s 395th match. Inzamam-ul-Haq, Mohammad Yousuf and Saeed Anwar are the other Pakistan players to make 8,000 ODI runs.