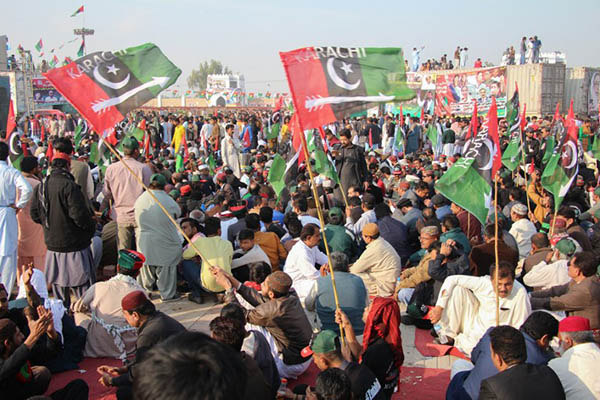 Thousands of mourners visited the shrine of former Pakistani prime minister Benazir Bhutto on Wednesday as the country marked 10 years since her assassination, with her killers yet to face justice.

An estimated 20,000 people gathered at the shrine in Garhi Khuda Baksh in the Bhutto family stronghold of Sindh province, television images showed. They came to pay their respects to the charismatic politician, who was the first woman to lead a Muslim country and a darling of the West.

“I feel we have become orphans after her martyrdom,” mourner Allah Varayo, 45, told AFP by telephone from the shrine. Others waved flags in the black, red and green of Bhutto’s Pakistan Peoples Party (PPP) as well as photographs of the slain leader.

“I could see more vigor among the people, who have come in larger numbers than the previous years,” said Ahsan Junejo, a resident of Bhutto’s hometown Larkana near the shrine.

Bhutto, a two-time prime minister, was contesting a third election when she was assassinated in a gun and suicide attack at a rally in Rawalpindi on Dec. 27, 2007. Her death plunged Pakistan into political uncertainty and street violence and shocked the world.

Former president and military ruler Pervez Musharraf is alleged to have been part of a broad conspiracy to have Bhutto, his political rival, killed before elections. He has been charged with the murder but has denied the allegation, and remains in self-imposed exile in Dubai. Earlier this year a Pakistani court declared him a “fugitive” in the case.

“Murderer, murderer, Musharraf, murderer!” Bhutto’s son Bilawal, chairman of the PPP, chanted along with the crowd at the shrine on Wednesday, an unusual expression of mass defiance against the military.

Musharraf’s government blamed the assassination on Pakistani Taliban chief Baitullah Mehsud, who denied any involvement. He was killed in a U.S. drone attack in 2009.

In 2010 a U.N. report accused Musharraf’s government of failing to give Bhutto adequate protection and said her death could have been prevented. To this day just two people have been convicted of the assassination—policemen accused of “mishandling” the crime scene.

Five alleged militants accused of being involved in the killing were cleared earlier this year, though they remain behind bars for now.

The unanswered questions surrounding the assassination have prompted a flood of conspiracy theories. “There are theories only, and even after 10 years we don’t know who was behind the murder,” said Muqtida Mansoor, a political analyst.