Home Lightbox Pakistan Has No Clue About Football, Says Maradona

Pakistan Has No Clue About Football, Says Maradona 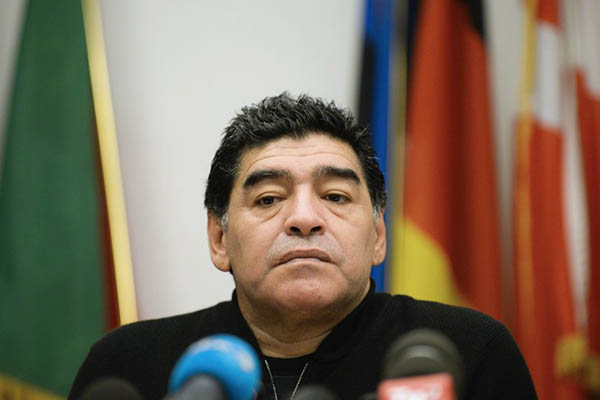 Football legend slams Argentine Football Association by claiming those in charge know as much about football as Pakistan does.

Football legend Diego Maradona has slammed the Argentine Football Association (AFA) by accusing those in charge of “understanding as much about football as Pakistan does.”

The 53-year-old won the 1986 World Cup with Argentina and coached the South Americans at South Africa 2010, where they crashed out with a 4-0 defeat to Germany in the quarterfinals. A football icon, Maradona won league titles in Spain, Italy and Argentina, but has never transferred his playing success to coaching.

In the wake of the failed World Cup bid four years ago, Maradona publically fell out with AFA president Julio Grondona and the national team’s director Carlos Bilardo, accusing the pair of sacking him. Four years on, Maradona has not forgiven the AFA and hit out at his former employers, comparing them to the Pakistan Football Federation, who are ranked 158th in the world.

“The AFA has played dirty tricks on me. I should have also been the Argentina coach at the World Cup (at Brazil 2014). But the current leaders of the association understand as much about football as Pakistan does,” Maradona told Sport Bild. “They don’t have a clue at all. To clarify: There are certainly many good things in Pakistan, but I have never seen them play a World Cup final. I say: The current association leaders in Argentina are the same as Pakistan.”

Argentina start their World Cup campaign against Bosnia and Herzegovina on June 15 and also face Nigeria and Iran in Group F.

We know Enough …. Including your (Maradona) “Hand of God” Goal in 1986 World Cup. Scumbag.

All the footballs are even made in Pakistan…tell that dumbass that even a child of Pakistan can be the better coach then him.

Dont be so emotional 🙂 Making a football doesnot mean you can play it well too. Just be easy umair.

I disagree. If the AFA officials were like PFF managers then Argentina would not even make it to the World Cup

Umair you proven that we Pakistanis don’t have a clue about football. If we do, I CAN’T even imagine disrespect this LEGEND. I totally agree with Maradona that Pakistan know nothing about football, ranked 158th in FIFA ranking it shows Pakistan Football Federation run by bunch of idiots.

Maradona is Right, there’s only one thing that Pakistan is Good for ( Politics,) THis why We electe the most corrupt and biggest criminals to be our Leaders

This is untrue ,we people of Pakistan, know that game,how to play…… but i respect this legend too

I think he is right. its logical. We don’t have infrastructure and the kind of efforts that should be put on to really invest in football. There is nothing wrong with his statement.

May be, but we know the sport of killing or burning alive people over false charges of blasphemy. Does that count?

If he is comparing The Argentinean ff with the pff how does that make it an insult… Pakistan has no infrastructure for any sport except cricket which is still not world class and yes pff has to do a lot more to come up the ranks but from the looks of it no one really cares. Maybe this will an eye opener for pff

To be Honest, it seems to me that Maradona has just heard the name of Pakistan, and knows nothing about it. Dear Maradona, We know much more about football, if we compare it to Argentina’s information about the Cricket.

pakistan got talent in football …. n we can play football better than any one….

At least we aren’t druggies

If he’s a legend then he should also act like one! He shouldn’t just bash other country like that. It’s pathetic. I respect him but his arrogant attitude is just not right!