Nationwide, death toll rises to 71, as the country prepares to start easing movement restrictions from next week

Pakistan’s confirmed cases of the novel coronavirus are still rising, with health officials on Saturday reporting that the number of infected patients in the country had hit 4,788, with 71 deaths and 762 recoveries.

A day ago, Pakistan had reported 727 recoveries and 66 deaths. According to the National Institute of Health’s official dashboard monitoring the COVID-19 pandemic in the country, 57,836 tests have thus far been conducted in the country of 220 million, with 2,457 of them occurring during the past 24 hours—far less than even the Punjab government’s claimed capacity of 3,000 tests/day. Various medical experts, including a visiting Chinese delegation, has warned that Pakistan is still testing far too few people, adding that no one has any idea of the true nature of COVID-19’s spread in the country because of the limited testing.

Punjab Chief Minister Usman Buzdar on Friday said that of the province’s 2,336 cases, 701 were reported in returning pilgrims from Iran; 733 were Tablighi Jamaat members; 80 were prisoners; and 822 were in various districts of the province. The highest number of cases apart from pilgrims and Jamaat members has been reported from provincial capital Lahore, which currently has 373 cases.

“We are taking every step to contain the virus and equipping our hospitals in every way to fight off this pandemic. Support us by staying indoors!” he posted on Twitter.

Sindh’s testing rate has noticeably dropped in recent days, which senior officials have attributed to a shortage of testing kits. The province, currently reporting 1,214 confirmed cases of COVID-19, has called into question the accuracy of testing kits distributed by the federal government. In a post on Twitter, Adviser to Sindh C.M. Senator Murtaza Wahab said that the federal government had provided the Sindh government with 18,000 tests that had been found to be “inaccurate by doctors.” Additionally, he said, the National Institute of Health had provided the province with 3,056 tests in total, while 3,000 “amplification tests were received, which are without VTMs and swabs.”

In Khyber-Pakhtunkhwa, Finance and Health Minister Taimur Jhagra reported that the death toll in the province had reached 25, with 656 confirmed cases and 131 recoveries. Noting that unlike the rest of the country, COVID-19 had been reported from every district of the province, Jhagra warned that coupled with the higher fatality rate, this could indicate a much greater number of undiscovered cases in the province. “Hence, everyone should exercise the utmost caution as we ramp up preparation of our system,” he said.

“We recognize that we are not testing enough. We will ramp up provincial capacity to 2000+ in the province, subject to availability of testing kits and UTMs, but will also suggest to the federal government to scale up capacity much more aggressively and to consider new technology,” he added in a posting on Twitter. 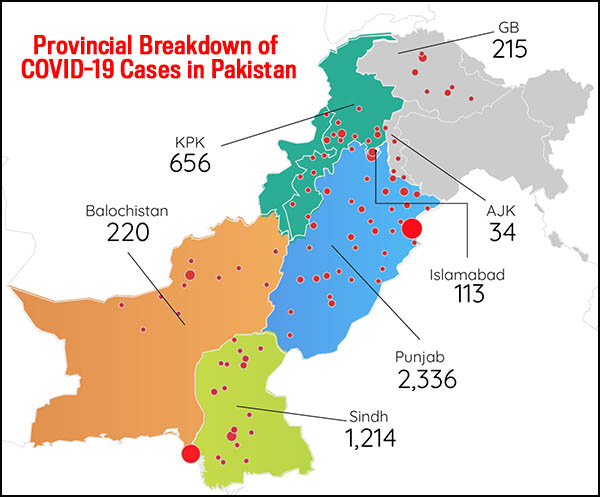 Balochistan province reported its first casualty from the coronavirus on Thursday, but has thus far remained the least affected of Pakistan’s four provinces. On Saturday, health officials reported that the number of confirmed cases had risen to 220, with 95 recoveries, leaving a mere 124 active cases. However, due to the low testing rates, this could well be far lower than the actual number of cases in the province.

In the federal capital, six new cases were reported overnight, bringing its tally to 113, with 13 recoveries. Meanwhile, in Gilgit-Baltistan, no new cases were recorded, but it has reported 125 recoveries out of 215 confirmed cases, meaning more than half of all patients have already recovered. In Pakistan-administered Kashmir, which has thus far reported no deaths from COVID-19, the total number of confirmed coronavirus cases rose by one to 34.

Most parts of the country remain under various restrictions, with both Sindh and Punjab expected to allow further easements from April 14. Public and private offices remain closed, apart from businesses deemed ‘essential,’ and public and private gatherings have also been banned. Punjab province allowed several export-oriented industries to resume operations from April 5, raising concerns that the spiraling infections in the province could worsen as more and more people end social distancing measures earlier to return to their jobs. Sindh C.M. Murad Ali Shah has urged the federal government to extend by a week the existing lockdowns, warning that the situation could worsen if the movement restrictions are ended too early.

Globally, the virus has now infected more than 1,699,800 people, with over 102,700 reported deaths. Governments across the world have halted flights, locked down towns and cities and urged people to stay at home. Overall, around 376,500 patients of the 1.6 million+ infected have recovered thus far.