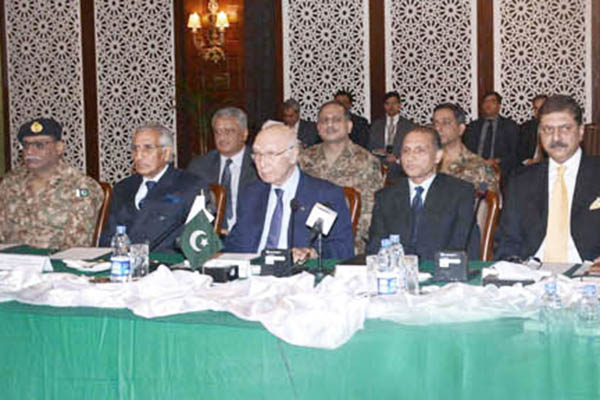 The group will develop roadmap for talks at next meeting in Kabul on Jan. 18.

Pakistan on Monday hosted four-country talks aimed at luring the Afghan Taliban back to the negotiating table with the Kabul government, even as the insurgents wage an unprecedented winter campaign of violence.

The talks in Islamabad, announced in December, came as the Taliban’s insurgency intensifies, particularly in the country’s south, testing the capacity of Afghanistan’s overstretched military and placing pressure on Pakistan to rein in its one-time proxies.

“The participants emphasized the immediate need for direct talks between representatives of the government of Afghanistan and representatives from Taliban groups in a peace process that aims to preserve Afghanistan’s unity, sovereignty and territorial integrity,” a joint statement said after the meeting. “The group would hold discussions on a roadmap at its next meeting to be held on Jan. 18 in Kabul,” it said.

Some analysts hope the added presence of China and the United States may help overcome mistrust between Kabul and Islamabad, though it remains unclear when the Taliban themselves will return to the negotiating table. They are not part of this week’s talks.

“The primary objective of the reconciliation process is to create conditions to bring the Taliban groups to the negotiation table and offer them incentives that can persuade them to move away from using violence,” said Sartaj Aziz, Pakistan’s top foreign affairs official, as he opened the talks.

The so-called “roadmap” talks are meant to lay the groundwork for direct dialogue between the Afghan government and the Islamist group, whose bloody insurgency shows no signs of abating more than 14 years after they were ousted from power by a U.S.-led coalition.

Pakistan was among three countries that recognized the Taliban’s 1996-2001 regime and it is widely seen as wielding influence over them today.

Aziz cautioned against “unrealistic targets and deadlines” and hinted it was unlikely major breakthroughs would be announced soon. “Keeping in view the sensitive nature of the group’s work, it should be our endeavor to keep the work of this group out of media glare, as much as possible,” he said.

A first round of dialogue with the Taliban themselves was held in July but collapsed after the group belatedly confirmed their leader Mullah Omar was dead. The news sparked infighting between senior Taliban leaders and the group’s new chief Mullah Akhtar Mansour, which in turn led to the creation of a new faction headed by Mohamed Rasool in November.

Mansour himself was shot and wounded in December, apparently by one of his own men, according to sources with the group.

A senior Taliban source from Mansour’s faction told AFP that Pakistan had been in touch with Taliban leaders, but the group was waiting to see whether their rivals from Rasool’s faction were also likely to attend future talks. “As far as I know, the Taliban leadership is willing to attend any such meeting in future but we will also see which other Afghan group or a Taliban splinter group will be invited for these proposed peace talks,” he said.

Rahimullah Yousafzai, an expert on the group, termed the talks an “important development,” adding the presence of the U.S. and China provided extra weight. But he cautioned: “The Taliban have not yet showed their willingness to talk. They said their first priority is to end their differences. In my opinion the splinter Rasool group will come but the presence of Mansour’s group is very important, so let us wait to see how they react.”

But despite the internal rifts and the onset of winter, when the Taliban traditionally break off fighting, the insurgents are still staging brazen attacks.

In September they briefly seized the northern provincial capital of Kunduz, and in recent weeks they have seized large swathes of the key opium-rich district of Sangin in the southern province of Helmand, their traditional stronghold. Observers say the intensifying fighting highlights a push by the militants to gain greater concessions during any future direct talks.