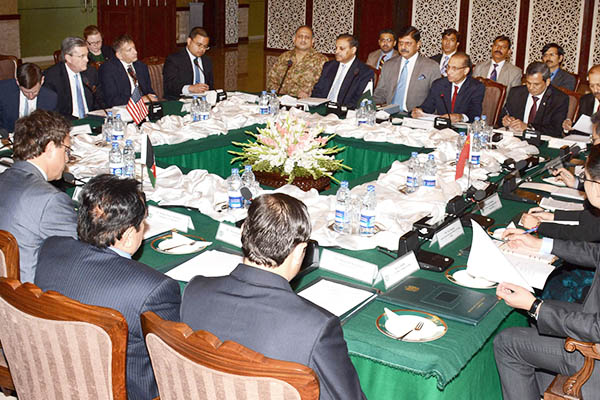 Afghan officials claim Islamabad refused to bring Taliban to negotiations in the past.

The latest meeting of representatives from Afghanistan, the United States, China and Pakistan comes days after Afghan authorities hanged six Taliban-linked militants, the clearest sign to date of Kabul’s mounting frustration at the lack of progress.

The four-nation group was formed in January to try to restart the direct peace talks. But the lack of a breakthrough has left many frustrated as the Taliban have intensified their insurgency, launched in late 2001 after they were toppled from power by a U.S.-led invasion.

On Wednesday a senior Afghan official sounded a more optimistic note. “We are hopeful this time after we had complaints regarding Pakistan, over not bringing the Taliban to the negotiation table. There is pressure on Pakistan by the U.S. and China, the important participants of the talks,” said Mawlawi Shahzada Shahid, a spokesman for a group called the High Peace Council. He added that a visit in April to Pakistan by a senior Taliban delegation from their political office in Qatar had further raised hopes.

“Pakistan had somehow convinced them to come back to the talks, and I believe there will be progress and development this time around,” Shahid said.

Direct Afghan-Taliban talks began last summer but ended abruptly after Afghan forces revealed that the Taliban’s founder Mullah Omar had been dead for two years, sparking infighting among the insurgents. The Islamist group has made the withdrawal of the 13,000 foreign troops still in Afghanistan a precondition for talks.