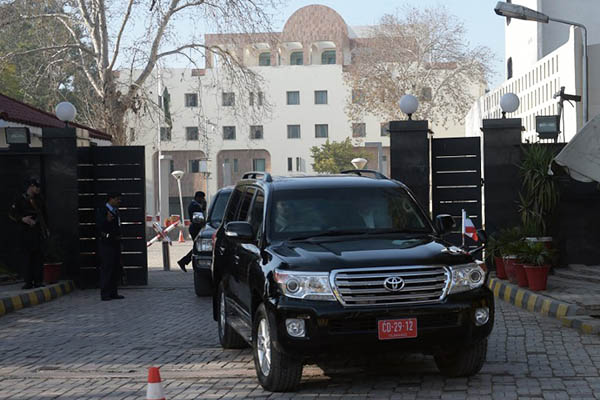 The venue of the four-way talks in Islamabad. Aamir Qureshi—AFP

Meeting to discuss mechanism for talks will not include Taliban in first phase.

Four-way talks aimed at reviving dialogue between Kabul and the Afghan Taliban will be held in Islamabad on Monday, officials said, with Pakistani authorities set to unveil a list of insurgents willing to negotiate.

The meeting between representatives from Afghanistan, Pakistan, China and the United States was announced in December. But Pakistani officials only confirmed the date on Sunday, having previously suggested they may take place later in the month.

The so-called “roadmap” talks are meant to lay the groundwork for direct dialogue between Kabul and the Islamist group, whose bloody insurgency shows no signs of abating more than 14 years after they were ousted from power by a U.S.-led coalition. But the Taliban themselves will not be present at Monday’s meetings, according to officials.

“Based on the four-way agreement, Monday’s meeting will discuss the mechanism for peace talks,” said Javed Faisal, spokesman for Afghanistan’s Chief Executive Abdullah Abdullah. “The Pakistani government will present the list of Taliban who are willing to talk and those who are not interested in talks,” he added.

Pakistan has agreed to cut off financial support to the Taliban fighters, including in Quetta and Peshawar, he said.

Pakistan was among three countries that recognized the Taliban’s 1996-2001 regime and Kabul has long accused Islamabad of continuing to covertly support the group in their insurgency. A senior official in Pakistan’s foreign ministry confirmed the meeting, adding that Islamabad would be represented by its foreign secretary Aizaz Ahmad Chaudhry, while Afghanistan would be represented by deputy foreign minister Hekmat Khalil Karzai.

A first round of peace talks with the Taliban was held in July but collapsed after the Taliban belatedly confirmed the death of their founder Mullah Omar.

News of the death led to infighting between senior Taliban leaders and the group’s new chief Mullah Akhtar Mansour, which in turn led to the creation of a new faction headed by Mohamed Rasool in November. In December Mansour himself was shot and wounded, apparently by one of his own men.

But despite the internal rifts and the onset of winter, the group have continued to carry out brazen attacks. In September the Taliban briefly seized the northern provincial capital of Kunduz—the first time they had gained control of a city since the fall of their regime in 2001. In recent weeks they have seized large swathes of the key opium-rich district of Sangin in the southern province of Helmand, their traditional stronghold.

However, Afghan forces on Sunday wrested back control of a northern district bordering Tajikistan two months after its capture by the Taliban, a rare nugget of positive news for them as the insurgency spreads.

Observers say the intensifying fighting highlights a push by the militants to seize more territory to try to secure greater concessions during any direct talks.