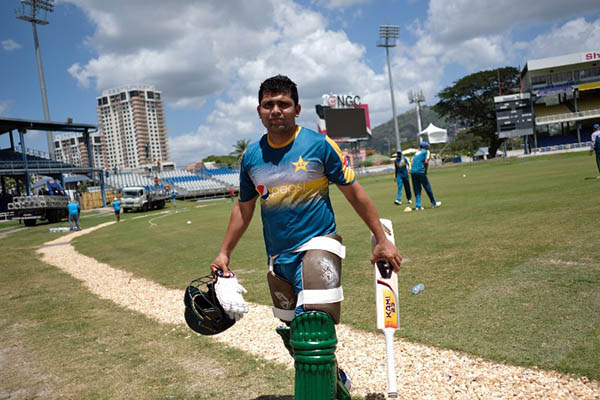 Pakistan on Monday ignored in-form opener Kamran Akmal but included three uncapped players in the squad for next month’s three-match Twenty20 series against the West Indies in Karachi.

Sarfraz Ahmed will captain the hosts in the matches played in Karachi on April 1, 2 and 3—the first ties between international sides to take place in the port city since 2009.

The 36-year-old Akmal misses out despite notching 425 runs in 13 Pakistan Super League (PSL) matches, including a century and four half-centuries for Peshawar Zalmi. But the selection committee led by former captain Inzamam-ul-Haq and head coach Mickey Arthur did not include him due to his age and poor fielding.

“We have included Talat, Asif and Shaheen in the squad primarily for their performances in the PSL,” said Inzamam. “Imad Wasim and Rumman Raees are still recovering from injuries so were not included.”

Asif, 26, smashed three sixes in one over to help Islamabad win the final and impressed with his power hitting throughout the PSL. Talat, 22, is an exciting all-rounder who bats left-handed. Shaheen, a tall left-arm paceman, took 5-4 against Multan Sultan in one PSL match. Head coach Mickey Arthur said the 17-year-old could become an important asset for the national team.

“Shaheen is an exciting and amazing talent and I am sure after a few years he will be a star,” said Arthur of Shaheen, who hails from the Khyber Agency bordering Afghanistan, where Taliban and Islamist groups had been active.

The 29-year-old Rahat Ali stages a comeback after last playing for Pakistan in January 2016.

The last international match Karachi hosted was a Test between Pakistan and Sri Lanka in February 2009, a week before the visitors were attacked by gunmen in Lahore. It hosted several international players for the PSL final on Sunday.