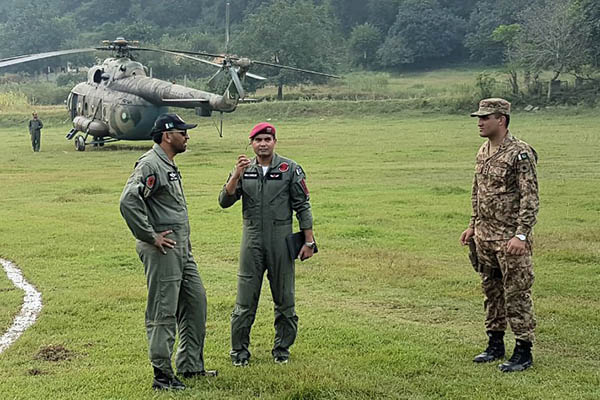 Pakistani military officials point to an Indian army post high on a forested ridge along the Line of Control dividing Kashmir, insisting any incursions are impossible, after skirmishes ignited dangerous tensions between the nuclear rivals.

The Army took the rare step of flying international media to the de facto border to make its case in a battle of competing narratives, after India said its commandos penetrated up to three kilometers into Pakistan on anti-militant raids. The presence of Indian forces so far across the Line of Control (LoC) would be a stinging blow to Pakistan, particularly after the 2011 U.S. raid that killed Osama bin Laden, which took place on its territory without its consent.

The media visit came Saturday as India’s army chief Dalbir Singh congratulated commandos involved in what New Delhi has described as “surgical strikes” to take out terrorist launch pads after a deadly attack on an Indian army base last month. Pakistan has flatly denied the claim, saying two of its soldiers were killed but only in cross-border fire of the kind that commonly violates a 2003 ceasefire on the LoC.

The helicopter tour took journalists to sectors just two kilometers from the dividing line, and near the locations India said it targeted in assaults on four militant camps. On hand were senior local commanders as well as Army spokesman Lieutenant General Asim Bajwa—an omnipresent media personality who has taken center stage on Pakistani television since the tensions erupted.

In villages like Mandhole, daily life was going on largely as normal despite the tensions, with shops and businesses open and children in pressed white uniforms walking to school. “You have seen the lay of the land,” said Bajwa, speaking from a command post overlooking the lush Bandala Valley, with Pakistani and Indian fortifications visible on the opposite hill. “You can see the way the fortifications are built and the way Pakistan has layers of defense and they have layers of defense… the LoC cannot be violated,” he said. “If they’ve caused that damage to us, we don’t know any has been caused to us! You can go and meet the civilian population. Our side is open: to the U.N. mission, to the media, to the general public,” he said.

It was not possible to verify the general’s claims, though villagers who spoke with a second AFP reporter in the area independent of the military-guided trip were also incredulous.

Sardar Javed, a 37-year-old journalist for Kashmiri newspapers and a resident of Tatta Pani sector, which lies just west of India-controlled Poonch sector where one of the strikes was said to have been carried out, said he had seen no evidence of a raid. “I’m not saying it’s not true because that’s the army line. It’s because I’m from the LoC and I’m a local journalist. News spreads fast around here and people get to know whatever happens,” he said.

Mountainous Kashmir is seen as one of the world’s most dangerous flashpoints, where Indian and Pakistani soldiers watch one another across valleys divided by barbed wire and land mines. The neighbors agreed on the de facto border in 1972, but both claim the territory in full. Two of their three wars have been fought over the Himalayan region.

Areas close to the 720-kilometer LoC are normally off-bounds even for Pakistani nationals, and the past three years have seen a surge in cross-border shelling.

Tensions have been simmering for months over unrest on the Indian side, where more than 80 civilians have been killed, mostly in clashes with security forces, during protests linked to the killing of a charismatic young separatist in July.

Some Pakistani observers say the vaunted raids are an attempt to shift the focus and allow India to escape scrutiny over its actions in Kashmir.

Pakistan-backed militants were blamed for the attack on an Indian army base last month in which 19 soldiers were killed, prompting angry calls for action from the Indian public ahead of Thursday’s alleged action.

U.N. Secretary-General Ban Ki-moon has offered to mediate in the dispute as the international community urged restraint.

Pakistan is eager to dispel to the world the notion it harbors terrorists; and to its own citizens vanish the idea it can be pushed around by its bigger neighbor, with whom it has long attempted to maintain a semblance of military parity. India, for its part, seeks to diplomatically isolate Pakistan following a series of attacks that it blames on Islamist militants backed by its western neighbor.

Leaning on a walking stick in the pristine hillside village of Baghsar on Saturday, 76-year-old local councilor Mirza Abdul Ghani told visiting journalists that the Indian claims were “a big lie.”

“I myself am ready to fight if they dare—I have my weapon in my house,” he said.