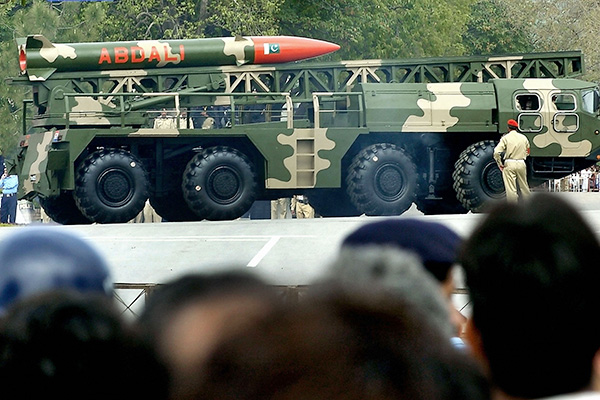 U.S., Russia scale back on warheads as China, India, and Pakistan boost cache.

Three of the world’s nuclear powers—China, India, and Pakistan—have increased their nuclear arsenals over the past year, the Stockholm International Peace Research Institute said Monday.

The arms race is all the more disturbing, said SIPRI, because of what the institute called a “fragile” peace in Asia, characterized by growing tensions since 2008 between India and Pakistan, China and Japan, the two Koreas, and others.

“While states have avoided direct conflict with each other and have stopped supporting insurgent movements on each other’s territory, decades-old suspicions linger and economic integration has not been followed up with political integration,” SIPRI said.

SIPRI acknowledged that the figures were to a large extent estimates, as the nuclear powers aren’t equally transparent, China being totally opaque, and Russia gradually becoming less open. SIPRI does not count North Korea and Iran as nuclear powers yet, as their respective programs are still considered in their early stages.

While the global total of warheads was down, SIPRI said it did not translate into a significantly diminished nuclear threat. “Once again there was little to inspire hope that the nuclear weapon-possessing states are genuinely willing to give up their nuclear arsenals,” said SIPRI senior researcher Shannon Kile. “The long-term modernization programs underway in these states suggest that nuclear weapons are still a marker of international status and power.”

Efforts to reduce arsenals of chemical and biological weapons have also been slow, according to SIPRI, a long-time advocate of abolishing weapons of mass destruction. The United States and Russia have not destroyed all their chemical weapons in 2012 as promised. Syria, in the grip of a bloody uprising for more than two years, has said it is prepared to use its weapons in the case of foreign attack.

SIPRI figures also show that the number of peacekeepers deployed around the world fell by more than 10 percent in 2012, due in part to the beginning withdrawal of international forces from Afghanistan. How far they fall will depend on how many peacekeepers will be deployed in Mali, where French-backed forces are fighting Islamist rebels—and potentially in Syria.

The report noted that the United Nations appeared paralyzed over the Syria crisis, as China and Russia had blocked Security Council moves to intervene. “The lack of action over Syria in 2012 highlighted the weakness of international commitment to the responsibility to protect,” said senior researcher Jair van der Lijn. “In the end, national interests and deep-rooted fears that the responsibility to protect undermines the principle of state sovereignty, seem to weigh heavier than the plight of populations caught up in conflict,” he added.

SIPRI’s annual report also contains data already published, including figures showing a decline in global arms spending in 2012 of 0.5 percent, the first drop since 1998. The report noted that China had overtaken Britain as the world’s fifth largest arms exporter after the United States, Russia, Germany and France.