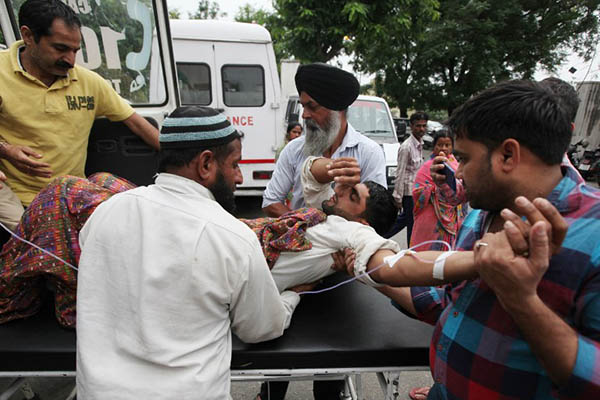 Volunteers and medical personnel place Liyakat Ali, who was injured in cross border firing between Indian and Pakistan, on a stretcher. Rakesh Bakshi—AFP

The heavy weapons fire along a rare stretch of frontier that India and Pakistan do not argue over also left 22 people wounded. It came a day ahead of a visit by Indian Prime Minister Narendra Modi to India-administered Kashmir.

The two sides started shooting at each other on Wednesday in the RS Pura sector of India-administered Kashmir, opposite Sialkot in Pakistan’s Punjab province.

“Four border residents and a Border Security Force soldier were killed in the Pakistani firing,” the Indian-administered region’s director general of police Shesh Paul Vaid told AFP. Twelve people were injured on the Indian side.

Pakistan’s military said four civilians, including three children, were killed in Sialkot sector by “unprovoked” firing by Indian troops. Another 10 were wounded.

“The Indian high commissioner [ambassador] was summoned to the Pakistani foreign ministry Friday to condemn the unprovoked ceasefire violations,” Pakistan’s foreign office said in a statement.

An Indian solider was killed on Wednesday in an exchange of fire that its border guards blamed on Pakistani Rangers”.

Officially there has been a ceasefire on the Kashmir border since 2003. But there are regular frontier skirmishes that have left hundreds dead along the nearly 930-kilometer border, most of which is disputed.

The flare-up came after India suspended military operations against rebels in the restive state for the Muslim holy month of Ramzan that began Thursday. Militants have rejected the truce offer.

Kashmir has been divided between the neighboring nations since the end of British colonial rule in 1947. Both claim the former Himalayan kingdom in full.

India has about 500,000 soldiers in the part of Kashmir it controls, where scores of armed groups are fighting for independence or a merger with Pakistan. Nearly daily violence in the region has left 72 militants, 33 civilians and 30 Indian security forces dead this year.

Security has been cranked up across the restive region ahead of Modi’s two-day visit beginning on Saturday. The prime minister is to inaugurate a hydropower station near the disputed border. He is also to open road projects including a tunnel to the Ladakh tourist region, more than 3,000 meters above sea level, which is mainly cut off in winter.