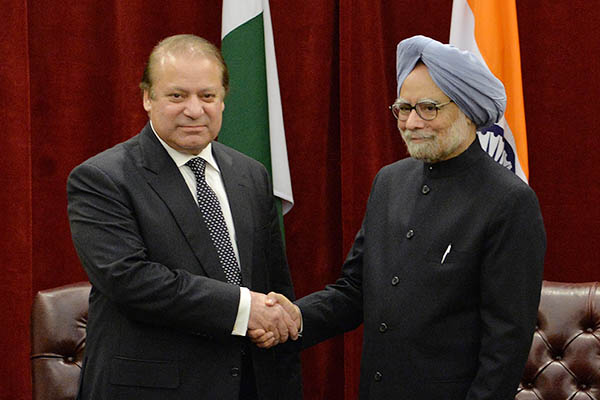 The leaders of India and Pakistan pledged Sunday to restore calm on their disputed border in Kashmir, with New Delhi demanding action before any improvement in relations.

Prime Minister Nawaz Sharif, who has advocated an end to historic tensions with India since he swept to power in May elections, held his first meeting with Indian counterpart Manmohan Singh on the sidelines of the annual U.N. summit.

An Indian official said that the two leaders, who met for more than an hour in a New York hotel, decided to task senior military officers to “find effective means to restore the ceasefire” in divided Kashmir.

“Both agreed that the precondition for forward movement in the relationship, which they both desire, is really an improvement of the situation on the LoC,” Indian national security adviser Shivshankar Menon told reporters, referring to the Line of Control in the Himalayan territory.

Pakistani and Indian troops earlier this year clashed in some of their worst skirmishes in a decade in Kashmir, which is claimed in full by both nuclear-armed rivals. Three days before the New York talks, militants raided an Army base in Indian-administered Kashmir, killing 10 people.

Pakistani Foreign Secretary Jalil Abbas Jilani confirmed that the two prime ministers agreed that the ceasefire “should be respected in letter and spirit.”

And he played down India’s warnings that the relationship hinged on calm in Kashmir, calling the meeting “extremely positive” and saying Sharif was committed to a “peaceful and sustained dialogue” with India.

Sharif, who was elected on promises to revive Pakistan’s troubled economy, has moved quickly to ease concerns in India.

In a speech before the U.N. General Assembly on Friday, Sharif called for a “new beginning” with India and said that the two developing nations had wasted money through their decades of intense military buildup.

But India has been pressing for concrete action by Pakistan since the sensational 2008 assault on Mumbai, in which Islamic militants laid siege to an iconic hotel and killed 166 people.

The two sides both said that Sharif committed to acting against militants linked to the attack. Jilani said that efforts would move forward after a recent trip to Mumbai by a Pakistani judicial committee that cross-examined witnesses. “I have absolutely no doubt … that this trial process will be speeded up,” he said.

While Sharif is fresh into his term, the 81-year-old Singh is likely to end his decade in office next year, as he is not expected to lead his Congress Party in general elections. Singh, who had resisted pressure to launch a military attack in retaliation for the Mumbai assault, criticized Pakistan as “the epicenter of terrorism” in a speech Saturday from the U.N. podium.

Menon said that Singh listened to proposals from Sharif for cooperation in trade and other areas but replied: “All that will be possible once we have dealt with the immediate issue and the immediate situation we face. As for how useful and productive the meeting was, I think the only proof will be in the months to come.”

Sharif and Singh extended invitations to visit the other country, but no dates were set, Menon and Jilani said.

Singh has held off on visiting Pakistan, which has invited him to return to see the town where he was born before the subcontinent’s partition in 1947 or to make a pilgrimage to holy sites of his Sikh faith.

It is not just ‘calm’ that is required by Pakistan and India but a much more warm relationship as true, good neighbors in order to improve the lives of their starving people. Both the PMs need to focus on that. But will they ‘risk’ their political careers by daring to tread that untrodden ground? Till that genuinely brave effort on part of both or either of them, all is too obvious. Great achievements come only after great attempts. Who can break the ice first?