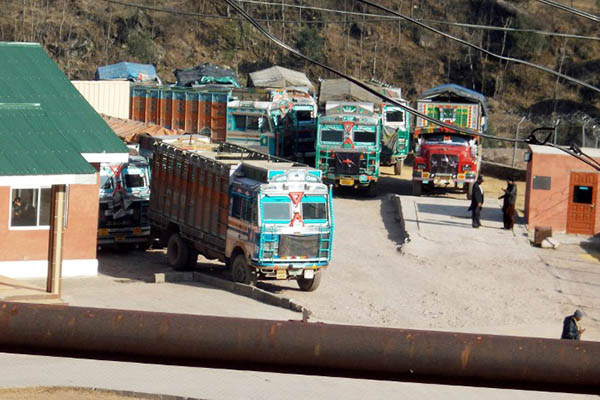 Pakistan and India have suspended trade across their de facto border in the disputed territory of Kashmir after Indian authorities detained a truck driver accused of drug trafficking, Pakistani officials said Sunday.

Kashmir has been divided between India and Pakistan since the two countries won independence from Britain in 1947. Both claim the scenic Himalayan territory in full. Barter trade across the de facto border began in 2008 as part of peace efforts but it is frequently disrupted over disputes.

“We were informed by the Indian authorities on Friday evening that they have stopped 22 Pakistani trucks which crossed the Line of Control (LoC) earlier that day,” said Basharat Iqbal, trade facilitation officer on the Pakistani side of the border. “They told us that they had discovered 12 kilograms of opium from a truck carrying oranges and were taking an action against the driver. After the incident, we also held 50 Indian trucks on Pakistani Kashmir side, because traffic crosses the border simultaneously,” said Iqbal.

Imtiaz Wayen, director-general of Pakistan-administered Kashmir’s trade and travel authority, said India was not entitled to stop Pakistani drivers on grounds of smuggling. “According to our agreement, if they find any banned item in our trucks they are bound to hand over that item and the relevant truck driver to us for further action,” he said. “We have informed the officials of the ministry of foreign affairs about this matter and have asked them to take up this issue,” he added.

In addition to barter trade, families separated by the de facto border may apply for special passes to visit their relatives on buses that operate two days a week.