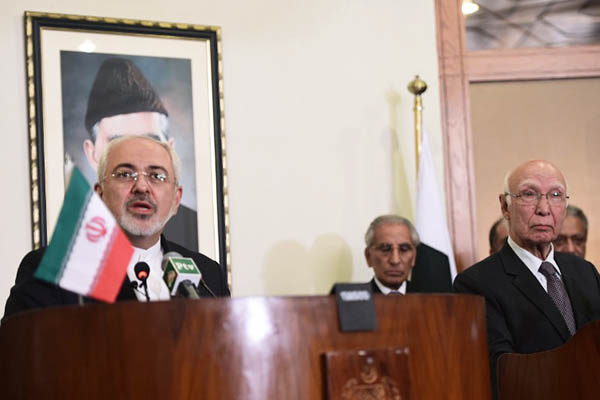 Iran and Pakistan on Wednesday pledged to work to find a negotiated solution to the conflict in Yemen, as the Saudi-led air campaign against rebels nears its third week.

A military coalition of largely Sunni Muslim countries led by Riyadh has been bombarding Houthi Shia rebels in Yemen in a bid to restore the government of fugitive President Abedrabbo Mansour Hadi.

Riyadh accuses Tehran, the major Shia power, of backing the Houthis, but Iranian Foreign Minister Mohammed Javad Zarif insisted his government wanted a swift end to the crisis, which has cost more than 640 lives since March 19.

Zarif laid out a four-stage plan for talks, calling for an immediate ceasefire followed by humanitarian assistance, dialogue among Yemenis and the formation of an “all-inclusive government.”

“It’s up to Yemenis to decide how to do this, we can only facilitate as neighbors… as countries with some influence one way or another,” he said at a joint press conference after talks with his Pakistani counterpart Sartaj Aziz. “We can all help bring this about but these are the four lines on which my government operates.”

Saudi Arabia has pressed Pakistan, a close and longstanding ally, to join its coalition against the Houthis but Islamabad has so far resisted. Pakistan has called for dialogue and, in addition to Zarif’s visit, held talks with Turkey on how to pursue this aim, while insisting it stands ready to defend Saudi territorial integrity.

Zarif said a “consensus” was emerging around the Iranian four-point plan, following talks with Oman, Turkey and Pakistan. But Aziz appeared cool on Iran’s idea of an immediate ceasefire, saying it “would consolidate the existing ground position,” which currently has Houthis in control of large parts of Yemen, including the capital Sanaa.

Instead he called for “a more comprehensive resolution on facilitating an intra-Yemeni dialogue to create the possibility of some kind of negotiated solution.”

Saudi Arabia has vowed to bomb the rebels into surrender to prevent them establishing a pro-Iran state on its doorstep. Zarif rejected the claims in Islamabad and said “fighting will not resolve this problem.”

“We are not bombarding anyone,” he said. “Our planes are not there hitting hospitals and bridges and flour factories.”

Washington is backing the coalition and late Tuesday said it was stepping up weapons deliveries and intelligence sharing in support of the effort.

Islamabad finds itself in an awkward position on Yemen, reluctant to offend oil-rich Saudi, with which it has long enjoyed close military and economic ties but also not wanting to get involved in a war that could fan sectarian tensions at home. Parliament is weighing up the Saudi request to send ground troops, aircraft and naval vessels to join the coalition.

Aziz said that after three days of discussions there was a “broad consensus” among lawmakers that Pakistani involvement in the war in Yemen “would not be advisable.”