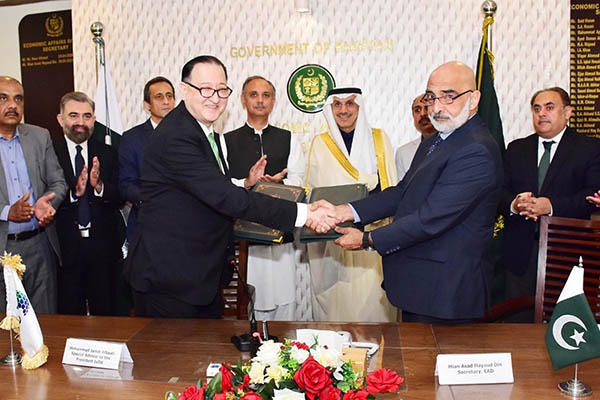 Pakistan and the Islamic Development Bank on Monday signed three Framework Agreements equivalent to $180 million in financing for the Mohmand Dam Hydropower Project.

Signed by Economic Affairs Division Secretary Mian Asad Hayauddin and Special Adviser to the President of the Islamic Development Bank Mohammad Jamal Al-Satti, the ceremony was witnessed by the lender’s president, Muhammad Al Jasser, and Economic Affairs Minister Omar Ayub Khan. Representatives of the Ministry of Water Resources and the Water and Power Development Authority were also present at the occasion.

Earlier, the Islamic Development Bank’s president called on the Economic Affairs minister and discussed various matters of mutual interest. Both sides discussed the ongoing economic cooperation between Pakistan and the lender, with the Bank agreeing to continue its technical and financial assistance to Islamabad.

According to the Press Information Department, Al-Jasser said that the Bank was proud to work alongside its partners to support Pakistan in a strategic project of national importance. “We are working with other partners from the Arab Coordination Group, along with one of the most experienced authorities in Pakistan, WAPDA, to develop a multi-purpose dam that will not only enhance energy and water supply but also the livelihoods of the local communities and better protect them against floods,” he said.

The Islamic Development Bank’s president said the signing of the framework agreements for the Mohmand Dam was a testament to the continuity of the strong partnership between Pakistan and and the lender, adding that it aligned with the country’s priorities and the Bank’s commitments to allocate more financing to climate-friendly projects. “We are looking forward to ensuring the smooth implementation of the project and we hope to witness its operation in due time,” he added.

Minister Omar Ayub, meanwhile, credited the Bank’s longstanding and trusted partnership with Pakistan, noting it had thus far provided cumulative financing of $14.5 billion in diverse sectors such as energy, finance, transportation, education and health. He said the $180 million financing for the Mohmand project would significantly enhance Pakistan’s electricity generation and water storage capacity, as well as creating new direct and indirect employment opportunities in the Khyber-Pakhtunkhwa province.

The Mohmand Dam Hydropower Project is a multi-purpose concrete faced rock-fill dam being constructed on Swat River around 48km from Peshawar and 5km upstream of the Munda Headworks in the Mohmand District of Khyber-Pakhtunkhwa province. In addition to generating 1,300MW of electricity, it is estimated to enhance Pakistan’s water storage capacity by 1,293-million-acre feet; provide food security buffer; 13.32 cubic meters of clean drinking water to the residents of Peshawar; and generate over 6,000 direct new employment opportunities for local residents.