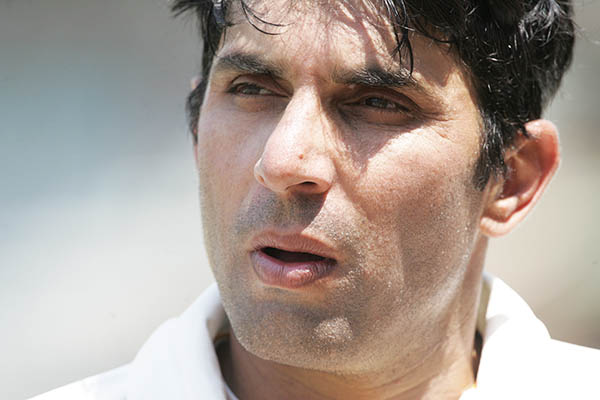 Misbah-ul-Haq says the important lesson from the 1992 World Cup is never giving up.

Pakistan captain Misbah-ul-Haq summoned up the spirit of Imran Khan and his 1992 World Cup warriors on Saturday as the strife-hit team looks to salvage its 2015 campaign.

Pakistan, engulfed by a series of on and off-field controversies, has lost both of its opening two games—by 76 runs to India and 150 runs against the West Indies. They are bottom of Pool B and defeat by Zimbabwe at the Gabba on Sunday will virtually condemn them to an early exit. But Pakistan have been down this road before.

Twenty-three years ago, when the World Cup was last played in Australia and New Zealand, Imran Khan’s team were also staring at early elimination. They lost by 10 wickets to West Indies, beat Zimbabwe, had a no-result when about to be defeated by England before two more losses to India and South Africa.

They then went on a roll, seeing off Australia, Sri Lanka and New Zealand to make the semi-finals. New Zealand were defeated again in the last-four before the title was clinched in Melbourne courtesy of a 22-run win against England.

“The important lesson is never give up,” said Haq. “That’s what you need to do as a player and as a team. That’s what Imran Khan usually says about 1992. Even when the team was in difficult times, they never gave up. They just kept trying, kept trying, and kept trying. At last they just managed to do what they really wanted to do in that World Cup. So, that’s what we are trying to do. We just have to do the things and we have to work hard, and that’s what we’re trying to do.”

Haq insists that his team are trying to forget their two defeats as well as off-field diversions which have seen eight players fined for breaking a curfew, reports of a bust-up in training and chief selector Moin Khan being sent home in disgrace for visiting a casino.

“It’s always like that,” said Haq, when asked to reflect on the deluge of criticism his team has endured for their woeful form. “They always say that they are with the team all the time, but never do it. You could say it’s always like that in Pakistan. We are always with the winning team, but when our team is in difficult times, we’re here [on their own.]”

Haq added that Pakistan’s slow start could be partly attributed to the damage caused by the late withdrawals of three key men—spinner Saeed Ajmal, veteran batsman Mohammad Hafeez and seamer Junaid Khan. As a result, Pakistan’s tactics and strategy had to be tweaked.

“We are playing with a different set-up. We were relying on spin and different bowlers, especially Junaid Khan. He was a main bowler for us,” said Haq.