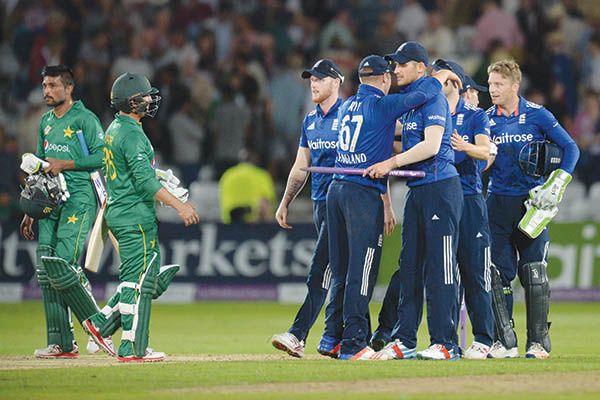 England now 4-0 up in five-match series, with last match due for Sept. 4.

Ben Stokes and Jonny Bairstow both made fifties as England beat Pakistan by four wickets in the fourth one-day international at Headingley on Thursday.

England, now 4-0 up in this five-match series, slumped to 72 for four pursuing a target of 248. But Stokes (69) and wicket-keeper Bairstow (61), only playing on his Yorkshire home ground after Jos Buttler was ruled out in the warm-up with a hamstring injury, got the innings back on track with a fifth-wicket partnership of 103.

Neither batsman was in at the finish of this day/night fixture, with Moeen Ali (45 not out) hitting Pakistan captain Azhar Ali for six to win the match with 12 balls to spare. “I’m pleased to get a go,” Bairstow told BBC Radio. “It’s unfortunate that Jos suffered an injury, and I got told 32 minutes before the start that I was playing so to contribute was nice. We thought it was an attainable target and if we’re honest, we cruised home. There was no panic at any point in that chase,” he added.

England were chasing a target that seemed all the more modest after their world ODI record total of 444 for three during a 169-run win in the third match at Trent Bridge on Tuesday. But they lost four wickets inside 15 overs of their reply to a Pakistan total of 247 for eight built on Ali’s 80 and all-rounder Imad Wasim’s unbeaten 57.

“It was a bit more of a competitive game,” said Ali at the presentation ceremony. “Again we were a few runs short…The wicket was turning but it was still a good pitch. But we lost wickets frequently.”

Giant fast bowler Mohammad Irfan, a late-call up to the squad, marked his first match of the series by removing both England openers.

The 7ft 1in (2.16m) Irfan produced a rising delivery that Jason Roy (14) could only edge and Mohammad Rizwan held a fine catch diving to his left at second slip.

Alex Hales, who had made an England ODI record 171 at Trent Bridge on Tuesday, then fell for eight when he was caught behind off Irfan, who was twice warned for running on the pitch.

Irfan took two for 25 in five overs but then twice went on and off the field and bowled only one more delivery, a wide, before, after pulling up in delivery stride, he walked off for the final time. “Irfan on his comeback game bowled well with the new ball, but his calves were cramping up,” said Ali. “We would have loved for him to bowl a second and third spell. A few more wickets and the game could have been different,” he added.

Joe Root, bidding for a new outright England record of six consecutive ODI fifties, again looked in superb touch while making 30. But Root, one of five Yorkshire players in the side, fell when his top-edged pull off Hasan Ali was safely caught at fine leg by Irfan.

England captain Eoin Morgan then gave his wicket away on 11 when he guided Umar Gul straight to Sharjeel Khan at slip.

Left-hander Stokes went on the offensive by driving Wasim for six over long-on.

Man-of-the-match Bairstow followed suit by skipping down the pitch to drive Mohammad Nawaz, Pakistan’s other left-arm spinner, for another six.

Stokes, with England 116 for four, was fortunate on 35 when a diving Nawaz at backward square could not hold a top-edged sweep off Wasim. He went on a run-a-ball fifty, including five fours and a six.

Stokes was out when he slog-swept Wasim to Babar Azam at mid-wicket.

Bairstow completed a 64-ball fifty with his fourth four, a fierce drive off Nawaz. However, going for a risky single, he was run out by Ali’s direct hit from mid-off.

Ali held firm as wickets tumbled around him. His 104-ball innings featuring two sixes and five fours, eventually ended when he lofted Rashid to David Willey on the long-off boundary.

The series concludes in Cardiff on Sunday.