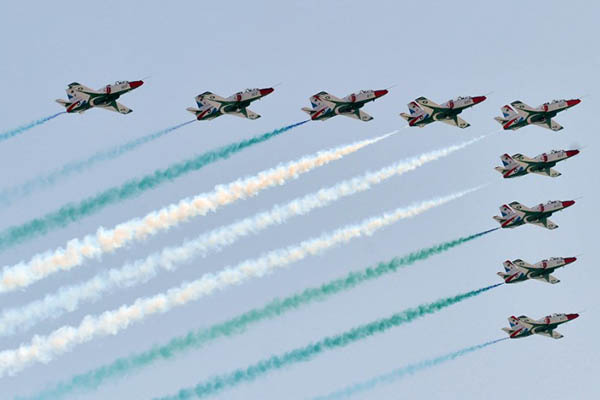 Pakistan on Monday celebrated 70 years of independence from British India with a patriotic display including a giant flag and a show of airpower, as the military’s top brass vowed to wipe out terrorists hours before a new bomb attack killed six soldiers.

Celebrations began at the stroke of midnight with firework shows in major cities.

Following the chest-thumping performance Bajwa said the country was making progress and promised to “go after each and every terrorist in Pakistan.”

“We have made a few mistakes in the past, but we are on the road to development under the guidance of our Constitution,” he added.

The attack came days after a powerful bomb targeted a military vehicle in the provincial capital Quetta late Saturday, killing 14 people including several troops. The military later said the blast, claimed by the Islamic State group, was intended to mar independence day celebrations.

“The independence that we got 70 years ago was the fruit of the exemplary struggle of our ancestors,” said Abbasi in an address to the nation. “Thousands of Muslims have made sacrifices for our future and the future of our children.”

Further south in Karachi the day began with a changing of the guard at the mausoleum of the country’s founder Mohammad Ali Jinnah, where politicians and military commanders laid floral wreaths.

The skies above the capital were later streaked with multicolored smoke as the air force hosted Pakistan’s largest air show to date.

Fighter jets crisscrossed over the leafy capital in aerobatic maneuvers as thousands packed shoulder-to-shoulder applauded from a park below. Planes from close allies Saudi Arabia and Turkey also took part.

Up north in the Swat valley near the restive border with Afghanistan celebrations were more subdued, with events at schools cancelled due to “prevailing law and order” issues. In nearby Peshawar, the capital of Khyber-Pakhtunkhwa province, Christians held special services at a church and freed doves to mark the holiday.

“Four years back my father and brother died in this church in a suicide attack, but I am still here praying for my beloved country,” schoolteacher Neelam Anwar told AFP.

In August 1947 the British Raj was dismantled with the subcontinent divided into two independent states—Hindu-majority India and Muslim-majority Pakistan. Millions were uprooted in one of the largest mass migrations in history, with experts estimating at least one million died in the communal violence unleashed by partition.

The carnage sowed the seeds of the acrimony that led to three wars, and generations later this defining moment in the subcontinent’s history is still polarized by nationalism and rancor.

The countries still wrangle over a large part of their shared border, especially in disputed Kashmir. They even recognize their independence from British rule on separate days, with Pakistan claiming Aug. 14 and India celebrating the following day.