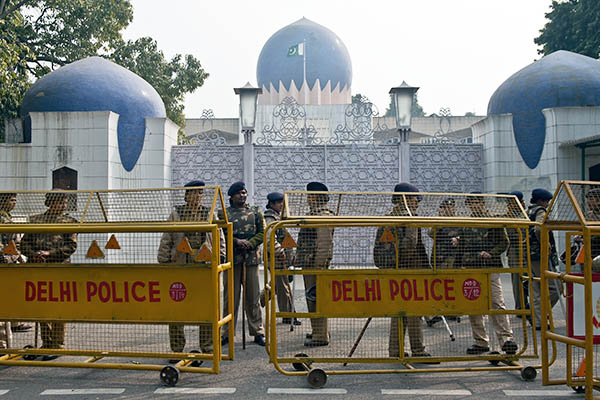 Officials at the High Commission in New Delhi claim they have not been provided any additional security despite requests to the Indian government.

Pakistan’s request for additional security at its High Commission in New Delhi has gone unanswered, according to officials at the embassy in New Delhi, despite the delivery of two threatening letters in the past week.

The first letter reached the embassy over the weekend. A second threatening message was delivered via post on Monday. Both letters warn of attacks on the High Commission, its employees, and their families.

“We have reached out to the Indian External Affairs Ministry, [both] in person and through other diplomatic channels,” Manzoor Ali Memon, the Pakistan embassy’s press attaché, told Newsweek. “It is the host country’s responsibly to ensure our safety. This matter is of grave concern to us.”

Earlier this week, Foreign Office spokeswoman Tasnim Aslam told journalists that Pakistan has “taken up the matter with Indian authorities,” and has demanded a formal investigation. The Indian government has already increased security around the High Commission, she added. However, employees of the High Commission claim the police presence has not been increased.

According to Indian media, security agencies have launched a probe to ascertain the identity of the senders but have chosen not to reveal the contents of the letters.

The threats come as India’s parliamentary elections enter their final week. Frontrunner Narendra Modi, the prime ministerial candidate of the Hindu-nationalist Bharatiya Janata Party, has claimed during his campaign that he will adopt a tougher stance with Pakistan. He has also accused Pakistan of exporting terror and hiding wanted criminal Dawood Ibrahim—charges denied by Islamabad.