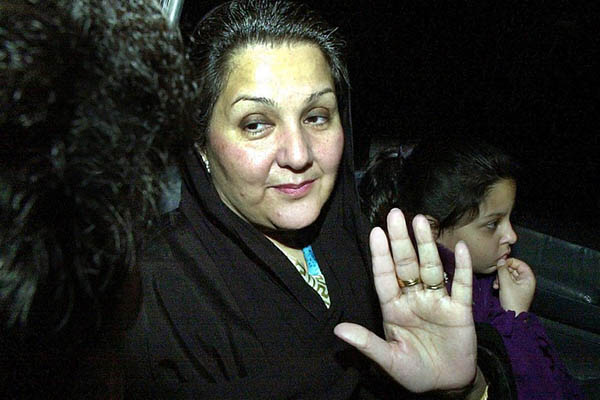 The 68-year-old wife of jailed ex-P.M. Sharif died of cancer in London

Kulsoom Nawaz, the wife of former Pakistan prime minister Nawaz Sharif, died of cancer in London on Tuesday as her husband remains locked up in jail in his home country following his fall from power.

Nawaz, 68, who was first lady of Pakistan three times, was diagnosed with lymphoma in August last year and had been receiving treatment at a private hospital in London for months.

Local media reported that she had been put on life support and a ventilator earlier in the day.

Sharif was ousted from the premiership a month before his wife’s diagnosis. He and the couple’s daughter Maryam Nawaz had left her in London and returned to Pakistan on July 13 this year in a bid to motivate support for the PMLN days before general elections. They were immediately jailed for corruption, with the party losing the July 25 vote to Imran Khan’s Pakistan Tehreek-e-Insaf.

Sharif had been banned from running, but maintained his control over his eponymous party, and his return was seen as a failed gamble to save his political legacy.

Conspiracy theories claiming that Nawaz was actually healthy, and that the Sharifs were faking her illness to gain sympathy, swirled in the final weeks of the acrimonious campaign. Nawaz had been at her husband’s side throughout his decades-long political career, which saw him become prime minister of Pakistan three times while facing military coups, prison and exile.

“She was a brave lady,” Siddiq-ul-Farouq, a stalwart party loyalist, told AFP, describing her as well educated and dignified.

For years Nawaz stayed out of politics, focusing on the couple’s family and home life. The couple has four children. But after Sharif was first imprisoned following a military coup in 1999 Nawaz stepped into the limelight, Farouq said.

Nawaz took over leadership of the party, defying house arrest to attend street rallies standing up to military dictator General Pervez Musharraf and demanding her husband’s release. Sharif was eventually allowed to go into exile in Saudi Arabia in 2007. “She fought against cancer with a lot of courage,” Farouq added.

The newly elected Khan, a former cricket hero who had campaigned against the Sharifs for his entire 22-year-long political career, sent his condolences on Tuesday. “The Pakistan High Commission in the U.K. has been directed to provide all possible assistance to facilitate the heirs of Mrs. Kulsoom Nawaz,” his office said in a statement. “Mrs. Kulsoom Nawaz was a brave woman,” Khan was quoted as saying in the statement.

The U.S. Embassy in Islamabad as well as the leaders of other political parties also sent condolences, as Pakistani social media was quickly flooded with messages. “Feeling so sorry for Maryam and Mian sahib (Nawaz Sharif),” tweeted one user, Mobeen Shafaat. “They had to leave her behind, I don’t know what they’ll be going through right now. Devastating.”

Others speculated on whether Khan’s government would allow Sharif or his daughter to return to London to collect Nawaz’s body.

Since his dismissal by the Supreme Court last year Sharif has engaged in open confrontation with Pakistan’s establishment, accusing the military of engineering his fall from power, curbing democratic development and fostering links with militants.