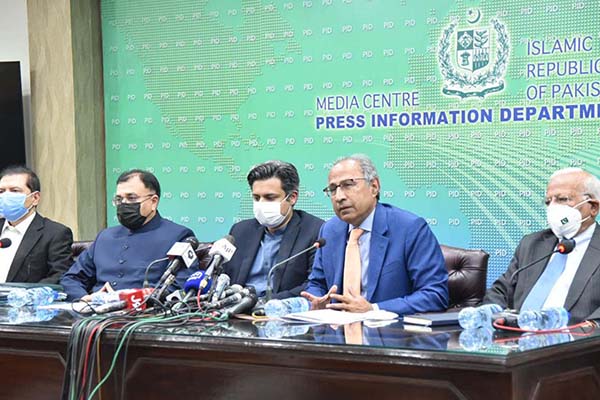 Pakistan’s federal cabinet on Tuesday approved the draft text of three pieces of legislation intended to meet key requirements of the International Monetary Fund (IMF) for a restoration of its lending regime.

The State Bank of Pakistan (Amendment) Bill 2021 aims at ensuring operational and administrative autonomy of the central bank, increasing the scope of its powers to control pricing and fight inflation. This is reportedly a requirement from the IMF for resuming the Extended Fund Facility to Pakistan.

“We will fast-track these bills,” Finance Minister Abdul Hafeez Shaikh told a press conference in Islamabad. He noted that Islamabad’s relationship with the IMF had been paused for the past year due to COVID-19, but noted that the process would resume once the global lender had completed its review of the country.

Accompanied by Industries Minister Hammad Azhar, Adviser to the P.M. on Reforms and Austerity Ishrat Hussain, and other senior officials, Shaikh said that the government had decided to appoint independent boards to manage state-owned enterprises without interference of ministries. He said the government would appoint boards of directors, which would then pick chairmen and chief executive officers. Under the draft bill, commercial state-owned enterprises would be exempt from procurement rules, allowing them to act independently of the government.

He said all three bills would strengthen the country’s institutions and its economy. Referring to the State Bank bill, he said that it provided a guaranteed five-year term for the central bank’s governor, increasing it from the current three years. The bill also surrenders the government’s right to borrow from the bank and instead encourages it to adopt measures to meet financial requirements through its own resources.

Shaikh said the Monetary Policy and Fiscal Coordination Board was being abolished and the federal government would coordinate with the State Bank through committees.

Under the proposed law, the authorized capital of the State Bank would be Rs. 500 billion, which its board could increase through a resolution secured with the government’s approval. The board would be empowered to define, approve and determine general internal policies and rules of the bank to improve the execution of its functions. It would also formulate and oversee foreign exchange reserve management, strategic investment and risk policy.

The board would also be empowered to approve the bank’s budget, annual reports and financial statements and adopt and monitor policies on internal and external audit, compliance, internal controls and risk management.

In the draft law, the SBP has been absolved of guaranteeing any loans, advances or investments entered into by the government or its entities. Similarly, any outstanding debt owed to the SBP would be retired with the enactment of the legislation in accordance with the terms and conditions under which it was extended. No roll-over or re-profiting of existing outstanding debts would be permitted.

The SBP would also not purchase securities issued by the government or, any government-owned entity or any other public entity on the primary market but would be allowed to purchase such securities in the secondary market.

The bill envisages the governor and finance minister liaising with each other on all matters that concern both the SBP and the Ministry of Finance. Meanwhile, the Auditor General of Pakistan would be authorized to conduct audit of all accounts of the SBP, so long as it doesn’t impact policy decisions.

The governor, board of directors or deputy governor and members of the monetary policy, officers and employees of the SBP would be protected against any suit, prosecution or any other legal proceeding, including for damages “for any act of commission or omission done in exercise or performance of any functions, power or duty.” They would also not be held personally liable for any action done in their official capacity in good faith and would be exempted from probes undertaken by the National Accountability Bureau and Federal Investigation Agency.