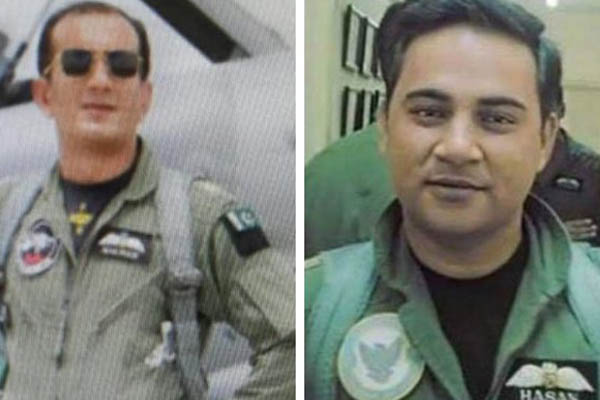 Pakistan on Wednesday for the first time named the pilots it says shot down two Indian warplanes last week, in a rare aerial engagement which had ignited fears of an all-out conflict with its rival.

The dogfight over the disputed Himalayan territory of Kashmir on Feb. 27 ended with both sides claiming they had shot each other’s planes down, and an Indian pilot captured by Pakistan. He was returned to India on Friday, crossing the Wagah border on foot. It also fueled fears that soaring tensions between the South Asian countries could erupt into their fourth war, with world powers rushing to urge restraint.

“Two Indian planes were shot down by Pakistan air force on Feb. 27,” Foreign Minister Shah Mehmood Qureshi told Parliament on Wednesday. He named them as Squadron Leader Hassan Siddiqui and Wing Commander Nauman Ali Khan, saying he wanted to “pay tribute” to them both.

Siddiqui had been widely named in unverified comments on social media.

Pakistan has said that one plane crashed on its side of the Line of Control, the de facto border that divides Kashmir; while the second landed on the Indian side. India, for its part, agrees that a second plane was shot down—but says it was a Pakistani plane, which Pakistan denies.

It has not been possible to verify the competing claims.

In recent days the nuclear-armed Asian countries have come closer to conflict than in years, after a suicide bombing in India-Occupied Kashmir killed 40 Indian paramilitaries. A militant group based in Pakistan claimed responsibility for the Feb. 14 blast, and 12 days later Indian jets bombed what New Delhi called a terrorist training camp deep inside Pakistan.

Pakistan has denied any damage or casualties, and independent reporting has shown the strikes hit a heavily forested area with little infrastructure nearby. Residents have said just one person was injured.

The next day Pakistani aircraft allegedly entered Indian airspace and the two nations’ jets engaged in the aerial dogfights. Pakistani and Indian soldiers have continued to fire over the Line of Control in the days since, killing several civilians on both sides.

But tensions have eased after Pakistan’s decision to release the captured pilot. On Tuesday Islamabad said it would send its high commissioner back to New Delhi after both sides withdrew their envoys at the height of the crisis.