The number of confirmed COVID-19 cases in Pakistan hit 11,940 on Saturday morning, leaving 8,932 active infections—541 more than a day earlier—after authorities reported the overall death toll had risen to 253 with 2,755 recoveries.

According to the government’s official dashboard, there were 228 new recoveries and 785 new infections in the past 24 hours. The rising tally comes as the government on Friday announced that it was extending the ongoing lockdowns till May 9 in a bid to curb the spread of the virus.

In another press conference, women doctors in Karachi pleaded to the government to stop easing movement restrictions, reiterating that there could be no economy if there was no one alive to facilitate it. Prime Minister Imran Khan has implied that any significant lockdown is automatically anti-poor and cannot be implemented, as Pakistan is an “independent nation.”

The country’s most populous province recorded 279 new infections on Friday, against 160 recoveries, raising its net total of confirmed COVID-19 cases to 5,046. In the past 24 hours, Punjab has reported 8 new deaths, raising the number of casualties caused by coronavirus in the province to 73.

A majority of the cases—in both Punjab and Pakistan as a whole—are being reported from Lahore, with the provincial capital now solely responsible for 22.19 percent of the total number of confirmed coronavirus cases in the country.

According to the provincial Health Department, of the 3,945 confirmed cases in the province, 2,692 have been recorded in provincial capital Karachi, of which 307 have recovered and 69 died. The metropolis has 2,316 active cases of the virus, 217 more than a day earlier.

The province continues to report the highest fatality rate in the country, hitting 89 on Saturday morning, 4 more than 24 hours earlier. Health and Finance Minister Taimur Jhagra on Friday told a press conference that in a bid to curb the spread of the disease, the provincial government was making face-masks mandatory, with anyone violating the order to be punished under law. 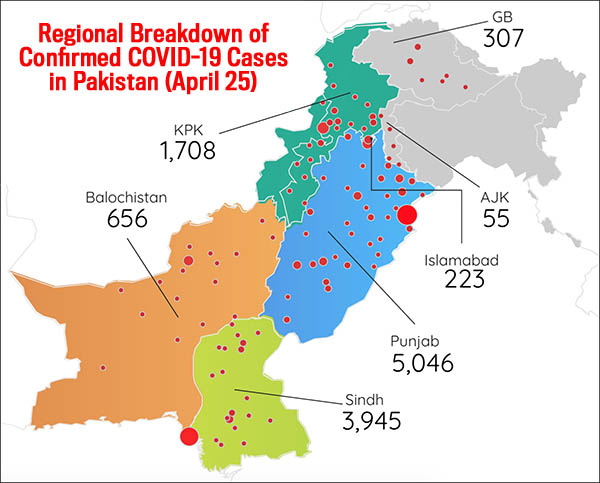 Overall, the province has now reported 656 confirmed cases of COVID-19, with 10 deaths and 176 recoveries. It currently has 470 active cases, 45 more than it did a day earlier. Per the Balochistan Health Department, a bulk of the patients—over 80 percent—are being reported from provincial capital Quetta.

The federal capital on Saturday reported that its confirmed number of COVID-19 cases had increased to 223, with no new deaths and 3 new recoveries. Overall, Islamabad has thus far reported 3 deaths and 29 recoveries, leaving 191 active cases, 6 more than 24 hours ago.

In Gilgit-Baltistan, the infections rose by 7 to 307, with no new deaths and 1 new recovery. Overall, 3 deaths have been reported from the region and 213 recoveries, leaving 91 active cases, 6 more than 24 hours earlier.

Pakistan-administered Kashmir has reported 0 new infections, and 3 new recoveries in the past 24 hours, sustaining its overall cases at 55, with 28 recoveries. The region currently has 27 active cases, 3 less than a day earlier.

Globally, the virus has now infected more than 2,830,080 people, with over 197,246 reported deaths. Governments across the world have halted flights, locked down towns and cities and urged people to stay at home, but there are signs of easements to help shuttered economies recover. Overall, around 798,700 patients of the 2.8 million+ infected have recovered thus far.