Nationwide, there are currently 11,361 active infections though reduced testing in most parts of the country raise worrying concerns

The total number of confirmed cases of the novel coronavirus in Pakistan climbed to 15,759 on Thursday morning, with 4,052 recoveries and 346 deaths, leaving 11,361 active cases.

According to the National Institute of Health’s daily update, the government recorded 627 new recoveries and 874 new infections in the past 24 hours. In the past week, all provinces except Sindh have reduced their testing rates—despite claiming on media that the testing capacity had actually increased—raising questions about the government’s ability to effectively implement it’s so-called “smart lockdown,” which requires extensive testing to adequately test, trace and isolate people infected with the virus.

Overall, only 8,249 tests were administered in the past 24 hours—281 less than a day earlier—with Sindh province accounting for nearly half of those. Punjab, despite possessing more than 50 percent of the country’s population, is lagging dangerously behind, having conducted less than 2,500 tests in the past 24 hours. According to the National Command and Control Center, local transmission now comprises 84 percent of all cases in Pakistan.

Punjab Health Minister Dr. Yasmin Rashid has claimed that the reduced testing is due to some technical faults and the government’s desire to shift to a test, trace and quarantine methodology. However, in the absence of expanded testing, the federal government’s desire to reopen even more sectors could spell disaster, warn medical experts.

The country’s most populous province recorded 234 new infections in the past 24 hours, raising its total confirmed COVID-19 cases to 6,061. Punjab has also reported 3 new deaths, bringing its casualty count to 103, the second-highest provincial toll in Pakistan.

Punjab conducted slightly under 2,500 tests in the past 24 hours, a far cry from the provincial government’s claims it has the capacity to test more than 3,500/day.

The Sindh government on Wednesday had to clarify that it was not ending the ongoing lockdown from today (Thursday) after rumors started to spread markets would be allowed to reopen. Information Minister Saeed Ghani told media no such plans were in place, as cases were continuing to climb both in the province and across the country. 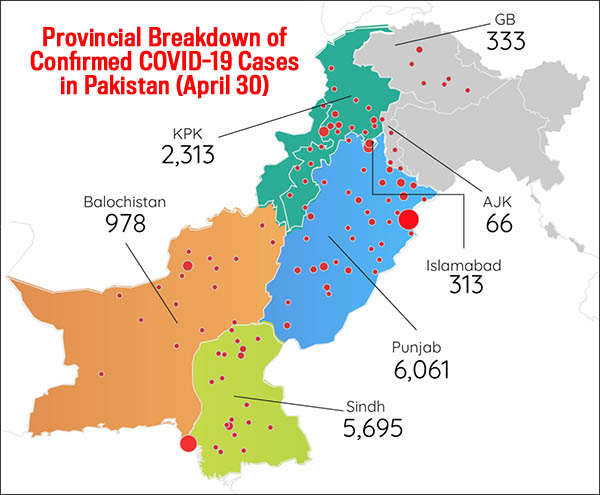 The province continues to report the highest death toll in Pakistan, with the tally climbing to 122, from 114 a day earlier. Overall, the province has now reached 2,313 confirmed cases of the novel coronavirus, with 614 recoveries. It currently has 1,577 active cases, 93 more than 24 hours ago.

Health and Finance Minister Taimur Jhagra last week claimed the province has a testing capacity of 1,500/day. However, much like Punjab, it has slowed its testing in recent days, having conducted less than 1,000 tests per day for the past 4 days.

The province has thus far reported 978 confirmed cases of the novel coronavirus, with 14 deaths and 180 recoveries. It currently has 784 active cases, 59 more than 24 hours earlier. Per the Balochistan Health Department, the majority of the new cases are of local transmission.

The province did not report any new deaths in the past 24 hours.

In Gilgit-Baltistan, cases of the novel coronavirus rose to 333, with no new deaths and 4 new recoveries. Overall, 3 deaths have been reported from the region and 228 recoveries, leaving 102 active cases, 1 less than a day earlier.

Pakistan-administered Kashmir has reported 1 new infection, and zero deaths or recoveries in the past 24 hours. Overall, it has 66 confirmed cases, leaving 29 active cases, 1 more than a day earlier.

Globally, the virus has now infected more than 3,220,970 people, with over 228,250 reported deaths. Governments across the world have halted flights, locked down towns and cities and urged people to stay at home, but there are signs of easements to help shuttered economies recover. Overall, around 1,001,900 patients of the 3.2 million+ infected have recovered thus far.