Nationwide, there have been 834 deaths due to COVID-19 so far, while 10,880 people have fully recovered

Pakistan recorded 1,581 new infections of the novel coronavirus in the past 24 hours, bringing the total confirmed cases in the country to 38,799 on Saturday, against 10,880 recoveries and 834 deaths. Nationwide, there are 27,085 active cases of the disease.

Prime Minister Imran Khan on Friday, once again, criticized his own government’s handling of the pandemic, saying he disagreed with any penalties for people found violating standard operating procedures designed to curb the spread of COVID-19. Similarly, he came out in favor of resuming public transport nationwide, despite claiming it was the choice of the provincial governments, as well as limited domestic flight operations. “We have to live with the virus,” he said, echoing an earlier statement from Planning Minister Asad Umar, who implied the country had now opted for a “herd immunity” strategy that all medical experts have said would inevitably result in a massive amount of casualties.

The Health Ministry, meanwhile, has now issued directions making face masks mandatory in public spaces, in a bid to curb the spread of the virus. In the past week, in violation of government guidelines, reopened markets and businesses were crowded with people without any masks, further raising the potential for the virus to spread.

Pakistan’s most populous province has decided to reopen public transport and shopping malls, has already reopened most small markets, traders and businesses and has also support resumption of domestic flight operations. The only sectors that remain shut are educational institutions and restaurants (which can offer delivery or takeaway service).

The further easing in lockdown restrictions comes as authorities have admitted that most mosques and markets that have been reopened have not been following the standard operating procedures designed to curb the spread of COVID-19.

In Sindh, authorities have announced that they would not reopen public transport in defiance of the federal government’s statements. Additionally, they have warned that cases are continuing to spread rapidly and this is not the time to further ease lockdowns—though authorities say they will follow the center’s lead if it announces mass easements.

The total number of confirmed COVID-19 cases in Sindh on Saturday morning rose to 14,916. Additionally, the province raised its casualties to 255, while its recoveries rose to 3,606. Overall, the province now has 11,055 active cases of the novel coronavirus. 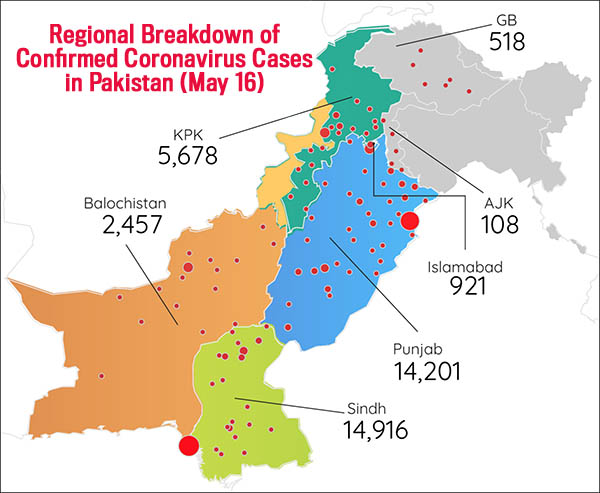 The province, which is also ruled by the Pakistan Tehreek-e-Insaf, has said that it would also resume public transport—though has added a caveat that this would require transports to implement SOPs to ensure social distancing.

On Saturday, authorities said the provincial death toll from the virus had now reached 291 fatalities, with 5,678 confirmed cases of COVID-19. Overall, the province has also recorded 1,613 recoveries, leaving 3,774 active cases.

The province has thus far reported 2,457 confirmed cases of the novel coronavirus, with 31 deaths and 383 recoveries. It currently has 2,043 active cases of COVID-19.

Islamabad on Saturday raised its confirmed COVID-19 infections to 921, with 7 deaths and 100 recoveries. Presently, the Islamabad Capital Territory has 814 active cases of the novel coronavirus.

In Gilgit-Baltistan, cases of the novel coronavirus rose to 518, with no new deaths and 6 new recoveries. Overall, it now has 4 deaths and 345 recoveries, leaving 169 active cases.

In Pakistan-administered Kashmir, the total number of confirmed cases has increased to 108. The region has recorded no new deaths or recoveries in the past 24 hours. It currently has 1 death and 76 recoveries, leaving 31 active cases of the virus.

Globally, the virus has now infected more than 4,628,500 people, with over 308,645 reported deaths. Governments across the world have halted flights, locked down towns and cities and urged people to stay at home, but there are signs of easements to help shuttered economies recover. Overall, around 1,758,040 patients of the 4.6 million+ infected have recovered thus far.