Pakistan on Tuesday morning reported 1,356 new infections of the novel coronavirus, raising confirmed cases to 57,705. Meanwhile, 30 new deaths were reported nationwide, raising the total fatalities to 1,197 against 18,314 recoveries. There are currently 38,194 active cases of COVID-19.

Special Assistant to the P.M. on Health Dr. Zafar Mirza, in a press conference on Monday, warned that the rapid pace at which the virus was still spreading could soon force another round of movement restrictions. The federal government, two weeks ago, eased almost all lockdown restrictions, maintaining bans only on restaurants and educational institutions.

At the behest of Prime Minister Imran Khan, public transport services have been restored in most parts of the country, while shops and retailers have been allowed to operate—whether or not they follow social distancing guidelines—for a little over a week.

In his press conference, Mirza appeared to blame the public, and not his own administration’s mixed messaging, for the continued spread of COVID-19. He claimed no one was following the social distancing guidelines announced by the government—which carry few, if any, penalties, making it difficult for law enforcement agencies to impose any restrictions.

On Tuesday, Pakistan’s most populous province raised its confirmed cases of COVID-19 to 20,654, against 6,124 recoveries and 352 deaths, leaving 14,178 active cases of the disease.

The province, along with the rest of the country, reduced testing over the Eidul Fitr festival to allow some breathing space for medical professionals who had been working nonstop in the past few weeks to cope with the rapid spread of the novel coronavirus. Despite this, there has been little evidence of an equitable drop in infections.

Chief Minister Murad Ali Shah on Sunday warned that the rate of spread of the novel coronavirus showed no signs of slowing down, and urged citizens to exercise caution.

The total number of confirmed COVID-19 cases in the province on Tuesday morning rose to 22,934. Additionally, the province raised its casualties to 369, while its recoveries rose to 7,973. Overall, the province now has 14,592 active cases of the novel coronavirus. 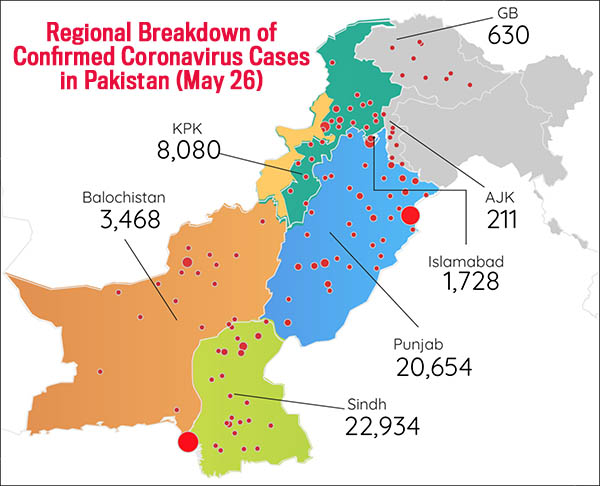 Adviser to the C.M. Ajmal Wazir on Monday urged citizens at a press briefing to be careful, and maintain social distancing during Eidul Fitr, as the threat of the coronavirus had not yet been eradicated.

Reiterating that the lockdown restrictions were eased to prop up the country’s economy—and not because COVID-19 is “under control,” as claimed by P.M. Khan—he said that if precautionary measures are not adopted, the virus could spread more, forcing the government to take tough decisions.

The province continues to report the highest death toll due to COVID-19, reaching 408 on Tuesday, against 2,529 recoveries and 8,080 confirmed cases.

There are currently 5,143 active cases in the province.

The province, which has extended its lockdown restrictions till next week and maintains a ban on public transport, has thus far reported 3,468 confirmed cases of the novel coronavirus, with 41 deaths and 993 recoveries. It currently has 2,434 active cases of COVID-19, the vast majority occurring in provincial capital Quetta.

The numbers from the province are likely far lower than actual cases, as the government has decided against testing any deceased brought in after exhibiting coronavirus symptoms. This is also in line with policies being followed in Punjab and Khyber-Pakhtunkhwa provinces, with experts warning this could cause problems in identifying viral hotspots.

Islamabad on Tuesday raised its confirmed COVID-19 infections to 1,728, with 17 deaths and 152 recoveries. Presently, the Islamabad Capital Territory has 1,559 active cases of the novel coronavirus.

In Gilgit-Baltistan, cases of the novel coronavirus rose to 630. Overall, it now has 8 deaths and 444 recoveries, leaving 178 active cases.

In Pakistan-administered Kashmir, the total number of confirmed cases has increased to 211. The region has also reported 2 deaths and 99 recoveries. There are currently 110 active cases of the virus in the disputed region.

Globally, the virus has now infected more than 5,590,350 people, with over 347,900 reported deaths. Governments across the world have halted flights, locked down towns and cities and urged people to stay at home, but there are signs of easements to help shuttered economies recover. Overall, around 2,366,570 patients of the 5.5 million+ infected have recovered thus far.