According to the Johns Hopkins University’s Coronavirus Resource Center, which monitors 188 countries that have witnessed COVID-19 outbreaks, Pakistan is now less than 12,000 confirmed cases from overtaking Mexico. The country had last week passed China and Canada’s confirmed cases.

The country, which Prime Minister Imran Khan claims “will reach its peak by end-July or August,” also recorded 83 new deaths, raising total deaths due to COVID-19 to 2,255.

In the 24 hours preceding 8 a.m., Wednesday, 1,290 patients tested negative, raising recoveries to 36,308. There are currently 75,139 active cases of the coronavirus in the country, with the National Command and Operation Center reporting 1,618 of those are in critical condition.

The World Health Organization, in letters written to the health ministers of all four provinces, has noted that Pakistan had ended lockdowns despite not meeting any of the prerequisites needed to ensure the virus did not spread unchecked. It has urged the government to immediately implement a 2-week-on, 2-week-off intermittent lockdown to allow for economic activities to continue while ensuring the rate of spread slows down sufficiently so that the country’s healthcare infrastructure does not become overburdened.

There has been no reaction from the prime minister to the letters; Khan had said on Monday that Pakistan “cannot go back to lockdown” and urged citizens to adopt SOPs instead. 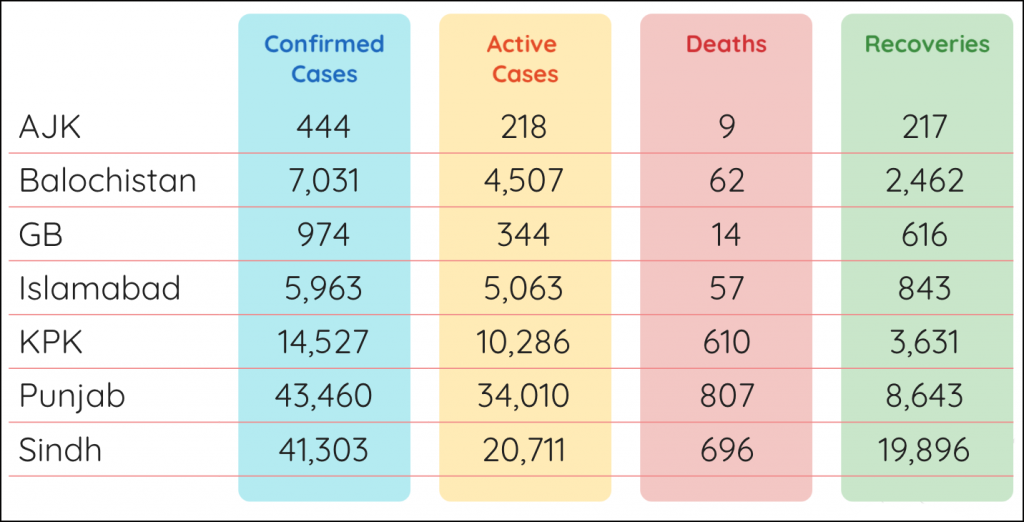 Health Minister Dr. Yasmin Rashid on Tuesday told a press conference that there is sufficient capacity in hospitals of Punjab to cater to an expected surge in cases and people “should not panic.” In a separate media interview, she admitted that Lahore is now the epicenter of the virus in the country but maintained that sustaining the economy was more important than adopting stricter restrictions to curb its spread.

On Wednesday, authorities reported 34 new deaths due to COVID-19, raising total fatalities to 807. The province also reported 2,641 new infections, raising confirmed cases to 43,460, against 8,643 recoveries. There are now 34,010 active cases of the virus in Punjab province.

“Cases are increasing in Karachi, Sukkur, Hyderabad, Badin, Ghotki, and other cities,” warned Chief Minister Murad Ali Shah on Tuesday. “The situation is getting worse due to the lack of precautionary measures.”

The total number of confirmed COVID-19 cases in the province on Wednesday morning rose to 41,303. Additionally, the province’s death toll climbed by 17 to 696, while its recoveries rose to 19,896. Overall, the province now has 20,711 active cases of the novel coronavirus.

There are currently 10,286 active cases of coronavirus in the province. 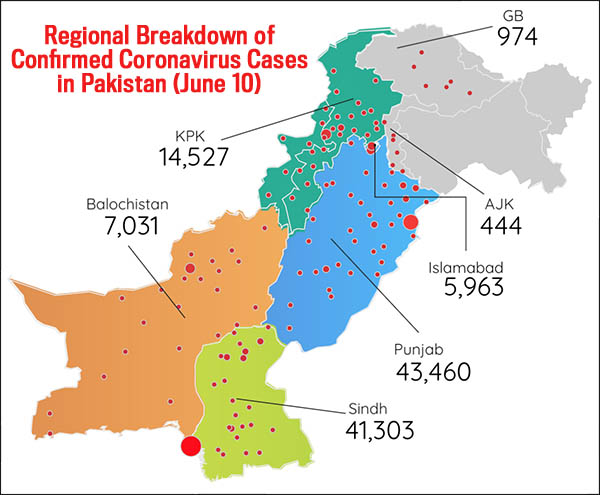 The provincial government on Tuesday warned traders that it would intensify its ‘smart lockdown’ if people continued to ignore SOPs to curb the spread of the coronavirus. Thirty-one percent of the total cases in Balochistan were reported in the past week, provincial spokesperson Liaquat Shahwani said. “If the cases continue to rise at the same pace, you can imagine what situation we will be facing next week,” he told reporters in Quetta.

Overall, confirmed cases of the novel coronavirus in the province rose by 243 to 7,031, with 4 new deaths raising to 62 fatalities caused by the disease. Overall, 2,462 patients have recovered from the deadly virus, while there are currently 4,507 active cases of COVID-19.

On Wednesday, the Islamabad Capital Territory raised its confirmed coronavirus infections by 178 to 5,963, with 5 new deaths, raising fatalities to 57. Overall there have been 843 recoveries, leaving 5,063 active cases of COVID-19.

Confirmed cases of the novel coronavirus in Gilgit-Baltistan rose by 22 to 974 on Wednesday morning. Overall, the region has thus far reported 14 deaths and 616 recoveries, leaving 344 active cases.

In Pakistan-administered Kashmir, confirmed cases increased by 32 to 444. In the past 24 hours, the region has reported no new deaths and 8 recoveries, leaving 9 total deaths and 217 recoveries. There are now 218 active cases of the coronavirus in the region.

Globally, the virus has now infected more than 7,323,760 people, with over 413,713 reported deaths. Governments across the world have halted flights, locked down towns and cities and urged people to stay at home, but there are signs of easements in nations that have reined in the virus’ spread to help shuttered economies recover. Overall, around 3,603,890 patients of the 7.3 million+ infected have recovered thus far.