Country records highest single-day jump of both new tests and infections, as government continues to advise citizens to ‘learn to live with it’

Pakistan on Thursday surpassed the total number of confirmed coronavirus cases of neighboring China, where COVID-19 originated in December 2019 before spreading across the globe.

In the same 24-hour period, 82 new fatalities were registered, raising the overall death toll to 1,770, while 30,128 people have now made full recoveries.

There are currently 53,336 active cases of the coronavirus in the country.

President Dr Arif Alvi on Wednesday night urged the public to help curb the spread of COVID-19 by strictly follow precautionary measures such as washing hands, wearing face masks and ensuring social distancing. In a posting on Twitter, he said: “Till today their seems to be no confirmed treatment of COVID-19, just improvement in patient management as we learn more. Government, media, and public responsibility is to strictly follow frequent washing of hands, compulsorily wear masks and ensure social distancing. We must.”

Missing from his list of preventative measures is lockdown restrictions—which have proven most effective globally in stemming the virus—but are considered anathema to Prime Minister Imran Khan, who has declared that Pakistan must just “learn to live with the virus.”

Information Minister Shibli Faraz, in what has become a rote warning from government officials that is increasingly considered an empty threat in light of the prime minister’s repeated statements, meanwhile warned on Wednesday that the government could impose a “strict” lockdown if people continued to ignore standard operating procedures (SOPs) to control the virus. 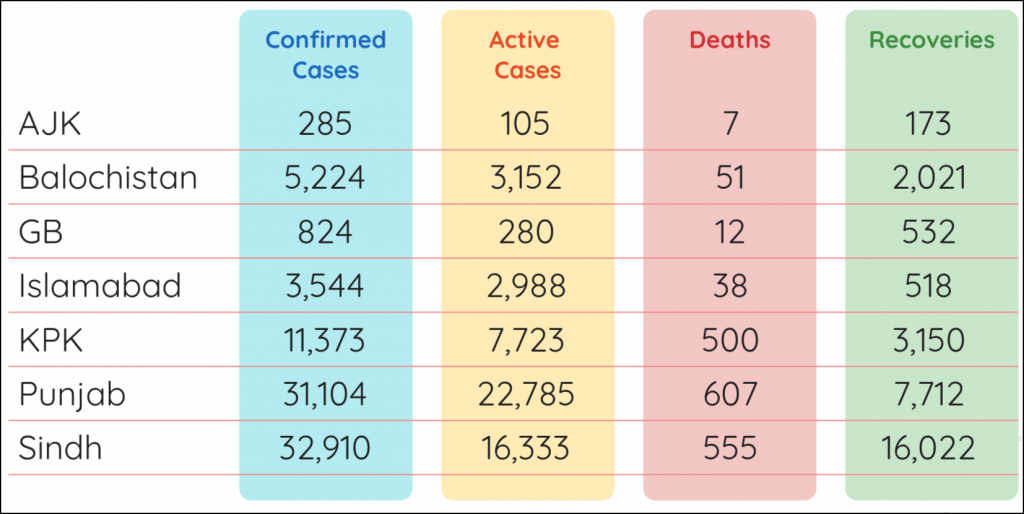 According to local media, the provincial government has decided that it will issue a notification today (Thursday) listing the penalties that will be enforced against people or businesses that violate SOPs, as the province continues to record the highest jumps in deaths, new cases, and active cases in the country.

In a statement, Chief Minister Usman Buzdar echoed the prime minister in saying people would have to just learn to live with the virus, again defeating threats from other officials of harsher lockdowns. He said shopkeepers should adopt a policy of “no mask, no service”—which the same government had claimed was unenforceable in the lead-up to Eid when the most SOP violations were witnessed nationwide.

On Thursday, the country’s most populous province registered 37 new deaths due to COVID-19, raising total fatalities to 607. The province also reported 1,615 new infections, raising confirmed cases to 31,104, against 7,712 recoveries. There are now 22,785 active cases of the virus in Punjab province.

The total number of confirmed COVID-19 cases in the province on Thursday morning rose to 32,910. Additionally, the province’s death toll climbed to 555, while its recoveries rose to 16,022—nearly a full 50 percent of all registered cases in region. Overall, the province now has 16,333 active cases of the novel coronavirus. 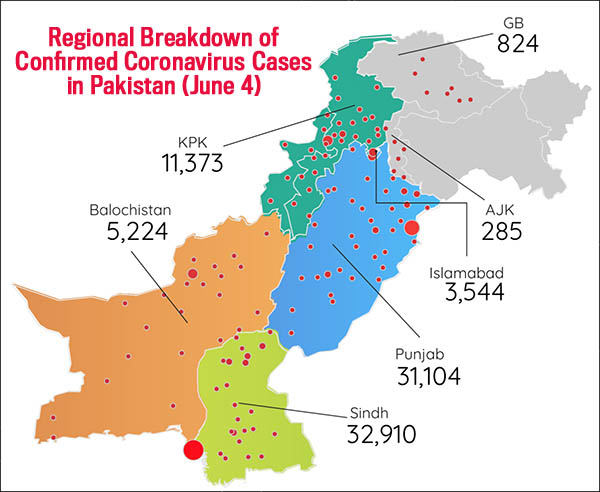 Provincial Health and Finance Minister Taimur Jhagra on Wednesday posted on Twitter that Pakistan had yet to figure out how to properly implement SOPs—a worrying assertion amidst surging infections and deaths.

“Pakistan is opening up, as is the world; the coronavirus is here to stay,” he said. “Much we can do better though. Specifically, we’ve not yet solved the challenge of SOPs being followed, whether transport or bazaars. This is now something that we will be pursuing much more aggressively,” he added.

There are currently 7,723 active cases of coronavirus in the province.

Provincial spokesman Liaquat Shahwani on Wednesday warned that strict legal action would be taken against anyone who shared the personal information of coronavirus patients with the public. “Sharing patients’ personal information is causing significant mental distress to both the patient and their families,” he said. “This was already morally forbidden, but the government has now officially banned the disclosure of official patient information,” he said, noting publicizing this information was resulting in discrimination against patients.

Overall, confirmed cases of the novel coronavirus in the province rose by 371 to 5,224, with 2 new deaths raising fatalities to 51. Overall, 2,021 patients have recovered from the deadly virus, while there are currently 3,152 active cases of COVID-19.

Islamabad on Wednesday issued a list of areas in the federal capital that would be sealed as they were witnessing a dramatic surge in infections—contrary to P.M. Imran Khan’s Monday statement in which he claimed “specific areas cannot be sealed, as the economy and livelihoods of those areas would suffer.”

On Thursday, the Islamabad Capital Territory raised its confirmed COVID-19 infections by 356 to 3,544, with 4 new deaths raising the death toll to 38.

Confirmed cases of the novel coronavirus in Gilgit-Baltistan rose by 45 to 824 on Thursday morning. Overall, the region has thus far reported 12 deaths and 532 recoveries, leaving 280 active cases.

In Pakistan-administered Kashmir, confirmed cases increased by 1 to 285. In the past 24 hours, the region has reported no new deaths and 3 recoveries. Overall, it has thus far reported 7 deaths and 173 recoveries, leaving 105 active cases of the coronavirus.

Globally, the virus has now infected more than 6,573,560 people, with over 388,040 reported deaths. Governments across the world have halted flights, locked down towns and cities and urged people to stay at home, but there are signs of easements in nations that have reined in the virus’ spread to help shuttered economies recover. Overall, around 3,170,530 patients of the 6.5 million+ infected have recovered thus far.