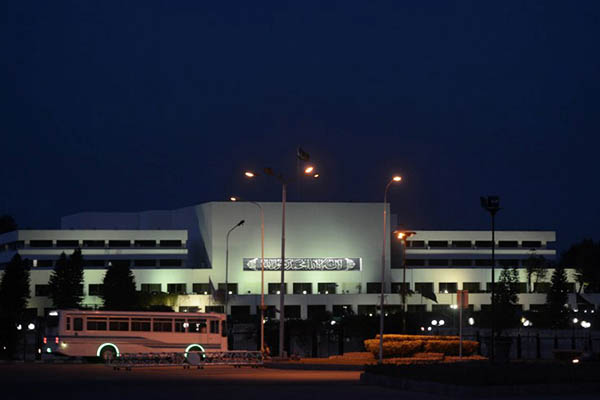 Jamaat-e-Islami, JUIF abstain from voting on 21st amendment to Constitution.

Parliament on Tuesday approved the setting up of military courts to hear terrorism-related cases, after a Taliban massacre at a military-run school in Peshawar shocked Pakistan last month.

Prime Minister Nawaz Sharif had announced the plan after militants gunned down 134 children and 16 adults at the Peshawar school. He also ended a six-year moratorium on the death penalty in terror cases, and several people have since gone to the gallows.

Members of the main opposition joined the ruling party on Tuesday to pass the measure. “The bitter pill of this new law is being swallowed for the security of Pakistan,” said Syed Khursheed Ahmed Shah, opposition leader in the Lower House.

The measure was approved after members of both houses of Parliament voted by more than a two thirds majority to amend the Constitution to allow for military courts to be set up. Members of two religious parties, the Jamaat-e-Islami and Jamiat Ulema-e-Islam-Fazl, abstained. “We were not taken into confidence when the amendments were being made,” claimed JUIF chief Fazalur Rehman. “The story of 9/11 is being repeated here,” he said. “After 9/11 Muslims were being targeted and the same thing is being done in the name of constitutional amendment. Some forces are trying to initiate a war between religious and secular forces in the country,” he added.

Sharif thanked the lawmakers from all parties who supported the amendments. “This day is a very blessed day for Pakistan because the nation has decided to uproot terrorism and terrorists and throw them out,” he told members of the Senate. “The nation should have a commitment that we will not sit contented till the last terrorist is killed.”

The prime minister said the law was aimed only at “hardcore” militants and the military courts would operate only for two years. Apart from the religious parties, some moderate political bodies and members of the intelligentsia have also criticized the military courts plan.

Meanwhile, in Karachi, two paramilitary soldiers were killed and a passerby injured during a raid on a hideout of Taliban militants. Police said the raid followed an intelligence report that the insurgents were hiding in a house in the Khurramabad neighborhood of Landhi district.

“The militants opened fierce gunfire while the paramilitary troops were raiding the house, killing at least two soldiers,” a senior police officer told AFP on condition of anonymity. Police officer Akhtar Farooq said seven people—two women, two children, two men and the owner of the house—were taken into custody for further investigation. He said empty shells from 9mm pistols and Kalashnikovs and some improvised explosive devices were found in the house.

An annual report by the independent Pakistan Institute for Peace Studies showed that the number of “terrorist attacks” declined by 30 percent in 2014. “A total of 1,206 attacks were carried out by militant, nationalist/insurgent and violent sectarian groups in Pakistan in the year 2014,” including about 731 attacks by the “Pakistani Taliban’s many branches,” said the report released Tuesday. A total of 1,723 people were killed in these attacks including more than 1,200 in the ones perpetrated by the local Taliban, added the report.

It said military operations in northwestern tribal areas where militants have bases helped to improve the security situation in the country overall.