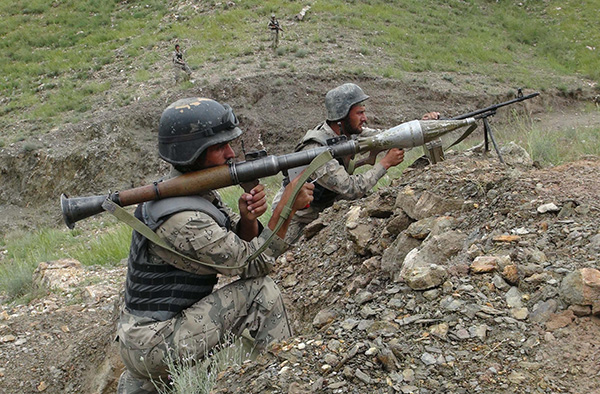 It was the latest clash between the fractious neighbors, whose ties have worsened in recent months despite Western efforts to get them to work more closely on peace efforts in Afghanistan.

On Thursday, the two nations accused each other of starting the firing at the border, a crucial battleground in the fight against Taliban militants who operate in both countries.

The Afghan charge d’affaires was summoned to the foreign ministry to protest against “unprovoked firing,” Islamabad said in a statement. “This is not the first time that the heavy fire was initiated from the Afghan side, causing heavy injury and damage to the Pakistani structures,” the foreign ministry said, adding that such incidents were creating “avoidable tension.”

An Afghan official who declined to be named said from Kabul that one Afghan police guard was killed in several hours of artillery exchanges.

“Afghan border-police posts came under fire at around 9 p.m. last night. Our border police returned fire,” Afghan interior ministry spokesman Sediq Sediqqi said. “The exchange lasted until 2 a.m.,” he said, adding no further details were available as the incident was being investigated.

The renewed friction focuses on a gate partially constructed by Pakistan at a site that Afghan officials say is inside Afghanistan. “The gate which was built inside Afghan territory was destroyed in last night’s clash, and Afghan security forces are now in control of the area,” said Ahmadzia Abdulzai, a spokesman for the government in Nangarhar province.

Witnesses said hundreds turned out at the funeral of the policeman, chanting anti-Pakistan slogans and hailing him as a national hero of Afghanistan. “It was continuous fire on one of our checkposts that forced our troops to retaliate,” a senior Pakistan security official said.

Pakistan, which backed Afghanistan’s 1996-2001 Taliban regime, is seen by the West as having a central role in negotiating a political settlement with Taliban insurgents who shelter in Pakistan’s border districts. But ties have worsened this year with the Afghan government accusing Pakistan of dropping its support for the peace process.