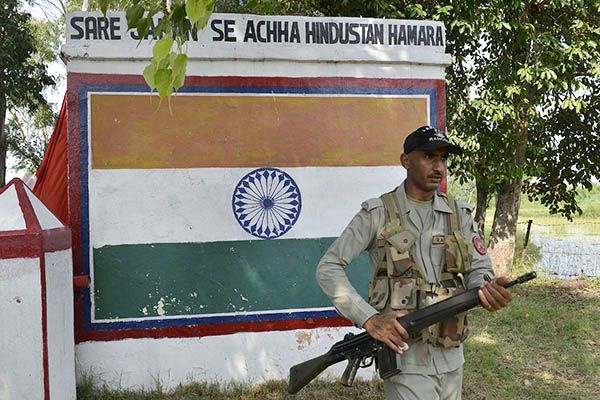 Foreign ministry says this marks the 54th incident of ceasefire violation since July.

Pakistan on Monday summoned a senior Indian diplomat over a cross-border firing incident near Sialkot, which left at least one civilian dead, the foreign ministry said.

Pakistani authorities accused India of a “ceasefire violation” and registered a formal protest over the incident, which took place on the eve of Indian Prime Minister Narendra Modi’s visit to the disputed region of Kashmir. “The Deputy High Commissioner of India was summoned to the Ministry of Foreign Affairs today [Monday] to lodge Pakistan’s protest over unprovoked Indian firing across the working boundary in Sialkot sector on August 10-11, 2014,” a press statement issued by the foreign ministry, said. “The firing resulted in one civilian casualty and injuries to three others,” the statement added.

Earlier, the Indian police also accused Pakistan of injuring four people during firing along their border in Kashmir.

India and Pakistan often accuse each other of violating a border ceasefire, which has largely held since 2003. Despite the truce, firing along the disputed de facto border called the Line of Control, that separates Kashmir into Indian and Pakistani sectors, has occurred sporadically.

Both India and Pakistan claim the region in full and have fought two of their three wars over its control. Since 1989 fighting between Indian forces and rebels seeking independence or merger of the territory with Pakistan has killed tens of thousands, mostly civilians.

“This was the 54th incident of ceasefire violation by Indian troops since July this year,” the foreign ministry said. “It was emphasized that such unfortunate incidents were taking place at a time when the leadership on both sides had expressed willingness to improve bilateral relations, which had paved the way for the Foreign Secretary-level talks to resume dialogue.”