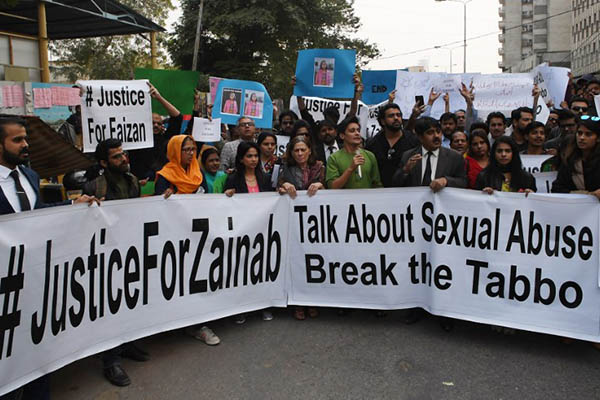 At least two people were killed when a protest against the rape and murder of an eight-year-old girl turned violent in Pakistan on Wednesday, police said, as a city scarred by child abuse erupted in fury.

Paramilitary forces were called to the city of Kasur near the Indian border, Punjab provincial police said. A senior police official told AFP hundreds were protesting the killing, which also prompted a deluge of outrage on social media.

The official, who spoke on condition of anonymity, said the child named as Zainab was kidnapped on Jan. 4. Her dead body was found in a garbage heap on Tuesday.

Zainab was the eighth minor to have been raped and murdered in Kasur in the past year, the police official said, adding that investigators could not confirm if they had a serial killer on their hands. Her murder ignited fury in Kasur, which made global headlines in August 2015 for a massive child abuse and extortion scandal.

Violence broke out on Wednesday when demonstrators tried to storm the police station, the police official said. “Two protesters have been killed and three others injured, the situation is still tense,” he said. It was not clear how the two protesters were killed.

A spokesman for the Punjab provincial police said paramilitary troops had been called in to restore order. #JusticeForZainab became a top Twitter hashtag in the country as outrage grew and politicians called for action.

“The beasts who have disrespected our daughters should be punished immediately,” former prime minister Nawaz Sharif said. Cricketer-turned-opposition leader Imran Khan urged authorities to act swiftly. “The condemnable and horrific rape of the minor had once again exposed how vulnerable children are,” he tweeted.

The girl’s parents, who had been in Saudi Arabia, flew back to Pakistan on Wednesday and told reporters at Islamabad airport they will not bury their daughter until her killer was arrested. “For the last two years, we are living in fear, parents are scared to send their kids outside,” her father, named as Amin Ansari, said in televised comments.

Pakistan’s chief justice called for a police report within 24 hours, a Supreme Court statement said, while the spokesman for the military tweeted that the army chief had directed “all out support to civil administration to arrest the criminals and bringing them to exemplary justice.”

The 2015 scandal saw allegations that at least 280 children were filmed being sexually abused by a gang of 25 men who blackmailed their parents by threatening to leak the videos. Dubbed the largest child abuse scandal in Pakistan’s history, it came to light after parents of the victims clashed with police in Kasur during a protest blasting authorities for failing to prosecute the case.