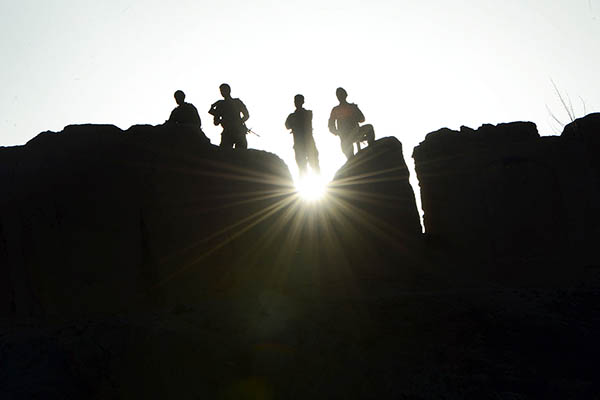 Cross-border shelling from militants based in Afghanistan led to deaths of four Pakistani soldiers.

The Pakistani military said earlier that militants launched the attack on a checkpoint in a restive tribal region. Afghan ambassador Janan Mosazai was summoned to the foreign ministry and “asked to urge his government to investigate the incident and share the result of the inquiry with the government of Pakistan,” the Pakistani foreign ministry said in a statement.

“Such incidents do not augur well for the positive trajectory of relations the two sides have been able to achieve after sustained efforts.” The ambassador was told: “Pakistan is willing to collaborate with Afghanistan to fight the common enemy but the attacks against our military personnel are unacceptable.”

Islamabad and Kabul regularly accuse each other of supporting militants who cross the porous border to carry out attacks and of giving sanctuary to them. Afghanistan in particular accuses Pakistan of supporting Afghan Taliban insurgents.

Afghan President Ashraf Ghani, who has actively courted Pakistan since coming to power last year, recently criticized his eastern neighbor of failing to rein in the Taliban following a series of deadly attacks in Kabul.

Pakistan historically backed the Taliban regime during its time in power in Afghanistan and some observers believe it continues to support the organization’s insurgency.

Rockets were fired Sunday from the Afghan side of the border into Khyber Agency, one of the seven semi-autonomous tribal regions where the Pakistani military has been battling Taliban and Al Qaeda militants for years. “According to reports, rounds fired from [the] Afghanistan side by terrorists hit an 8,000-feet-high Pakistani post in Akhandwala Pass,” the military said in a statement.

Four soldiers were killed and four others wounded, it said. “Pakistani troops befittingly responded and eliminated the group of terrorists,” it added.

Pakistan has been demanding Afghanistan hand over hardline cleric Fazlullah, now chief of the Tehreek-e-Taliban Pakistan (TTP) and believed to be hiding in eastern Afghanistan. Fazlullah, who fled a 2009 military offensive in Swat, first rose to prominence as the leader of the Taliban’s two-year rule in Swat in 2007, which featured public floggings, multiple attacks on girls’ schools and executions.

Fazlullah has a $500,000 government bounty on his head and has mounted some brutal and humiliating attacks on Pakistan’s military, including the beheading of 17 soldiers after an attack in June 2012 from across the border.

Local militants have fled ongoing military offensives since 2008, taking refuge across the border from where they have launched attacks on Pakistani military checkpoints and civilians.