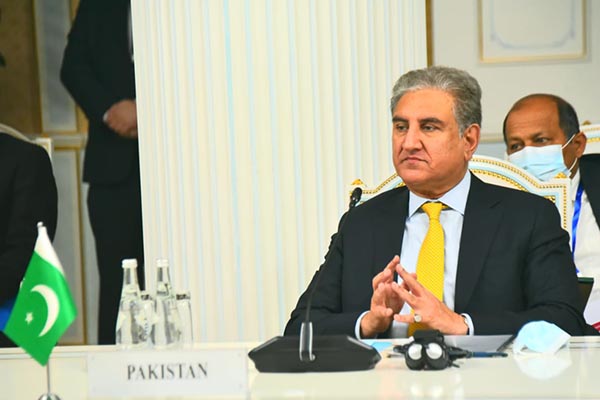 Foreign Minister Shah Mahmood Qureshi on Tuesday reaffirmed Pakistan’s desire for a peaceful, stable Afghanistan, stressing that Afghans have a historic opportunity to end the conflict ravaging the war-torn state.

“No other nation could claim to have such immutable bonds with Afghanistan, and thus [be] more desirous of peace in Afghanistan, than Pakistan,” he said in an address to the 9th Ministerial Conference of the Heart of Asia-Istanbul Process in Dushanbe. Noting that Afghanistan was an important neighbor of Pakistan, he stressed that the ongoing peace process had reached a “defining” juncture.

“Having faced conflict and instability for over 40 years, Afghanistan has never been so close to turning the tide,” he said, referring to intra-Afghan negotiations and last year’s Doha peace agreement. “The progress created thus far has indeed created a historic opportunity for the Afghan leadership to achieve an inclusive, broad-based and comprehensive negotiated political settlement. We have arrived at this stage guided by the conviction that there is no military solution to the conflict in Afghanistan,” he added.

“In our outreach to Afghan leaders across a wide spectrum, Pakistan has consistently urged them to remain engaged for securing a positive outcome. Our message to them is to take the process forward through substantive and result-orientated negotiations,” he said, while acknowledging that “formidable challenges” plagued the process.

“We have consistently cautioned against the role of spoilers, both within and outside Afghanistan. We remain deeply concerned about the continuation of violence across Afghanistan. We fear that any space gained by ISIS and Al Qaeda could accentuate the threat of terrorism,” he warned, as he called on the international community to continue facilitating the peace process.

“When the peace agreement was signed in Doha we called it a moment of hope and optimism. It must be our collective endeavor to ensure that this hope is not dissipated, that this rare opportunity is not lost,” he said. “For this everyone will have to summon every ounce of patience, commitment and perseverance,” he added, stressing that a “spirit of compromise” was essential in the coming days.

Highlighting Pakistan’s contribution toward Afghanistan’s development, Qureshi said that Islamabad had not only been facilitating the peace process, but also extending all possible support to Kabul. He noted that Pakistan had committed $1 billion for Afghanistan’s development and reconstruction, of which nearly $500 million had already been spent on infrastructure and capacity-building projects.

Similarly, said the foreign minister, a new visa regime has been instituted to facilitate cross-border travel. Even during the COVID-19 pandemic, said Qureshi, Pakistan had opened five border crossing points with Afghanistan to facilitate bilateral and transit trade. “Pakistan has also operationalized Gwadar Seaport for Afghan Transit Trade,” he added.

Qureshi said Pakistan was committed to advancing regional connectivity and energy projects such as CASA-100 and TAPI. He said the peace process should also include the long-term reconstruction and economic development of Afghanistan to encourage Afghan refugees to return to their homeland with dignity and honor through a time bound and well-resourced plan.

The foreign minister hoped that the deliberations in Dushanbe would prove meaningful, and reflect the international resolve to support and stand by the Afghan people at this most consequential time in their history.