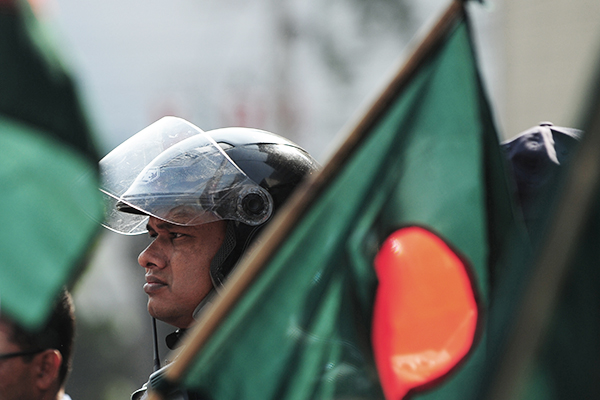 Pakistan on Wednesday recalled one of its diplomats from Dhaka after she was named as allegedly having financed a suspected Islamic extremist on trial for espionage, a Bangladesh official said.

“The female second secretary of the high commission was sent back to Islamabad this afternoon, two days after Dhaka informally asked for her departure,” a senior official at the Bangladeshi foreign ministry, speaking on condition of anonymity, told AFP.

The Pakistani High Commission did not immediately respond to an AFP query about the whereabouts of the diplomat, who has previously been named in press reports as Farina Arshad. The move comes after Idris Sheikh, a suspected member of the banned Jamayetul Mujahideen Bangladesh, told a Dhaka court about his ties to Arshad, saying he received funds of 30,000 taka.

After Sheikh’s claims against Arshad were widely reported in the Bangladeshi media, the Pakistani mission issued a statement dismissing what it called “utterly baseless media reports… maligning a female diplomat stationed in Dhaka.”

Bangladesh’s Home Minister Asaduzzaman Khan has said that the government would take action against Arshad if the allegations against her were proved, according to local news outlets.

Relations between Bangladesh and Pakistan have soured in recent months after Islamabad strongly protested against the execution of two Bangladeshi opposition leaders for war crimes during Dhaka’s independence struggle against Pakistan in 1971. The two leaders hanged last month were accused of siding with Pakistan during the war and committed atrocities with help from Pakistani forces.